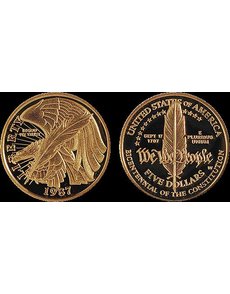 It is not wholly unusual for new U.S. coinage releases to recast designs from the past. The U.S. Mint has used sculptor Augustus Saint-Gaudens’ 1907 designs on the gold American Eagle and for the 2009 Ultra High Relief gold $20 double eagle; James Earle Fraser’s 1913 Indian Head 5-cent coin designs have been employed on gold and silver coins; and Adolph A. Weinman’s 1916 Walking Liberty half dollar obverse design graces the silver American Eagle.

Each of these designs merits its honors, but looking to the past has had the unintended consequence of casting new coinage design in the role of second fiddle.

While renowned and top medalists have always contributed to the design of U.S. coinage, the successes of contemporary designers are often overlooked.

One such artist is medalist Marcel Jovine, who contributed designs to seven U.S. commemorative coins between 1987 and 2001. When Jovine passed away 10 years ago, in 2003, author and researcher D. Wayne Johnson wrote that Jovine “raised the bar for American medallic art by his highly creative and detailed medallic designs.” That may be true, but how many coin collectors are familiar with his work?

Born in Italy in 1921, Jovine immigrated to America after World War II. Although trained as a classical artist, he started his career in America as a successful toy maker. During the 1960s, he designed anatomical model kits for children, the Visible Man and the Visible Woman. Finally in the 1970s, he turned fully to medallic art.

The first coin designed by Jovine was the 1987 U.S. Constitution Bicentennial gold $5 half eagle.

In the Coins column of The New York Times, Ed Reiter wrote, “Mr. Jovine’s design is the most impressive work of coinage art to appear in this country in many years.’’ The coin sold well and, in coinage, it is the best example of Jovine’s style and art. Struck at the West Point Mint with sales totaling 651,659 Proof pieces and 214,225 Uncirculated coins, it was considered a huge success. Today examples can be bought for less than $500, except at the Mint State 70 and Proof 70 grade level.

His next coin design was the reverse of the 1988 U.S. Olympic half eagle. Although Jovine’s reverse was overshadowed by Chief Engraver Elizabeth Jones’ fantastic, classically styled obverse, the clean and modern reverse helped this coin “[span] centuries of art and culture,” according to David L. Ganz in Official Guide to U.S. Commemorative Coins: Current Information That All Collectors Want and Need.