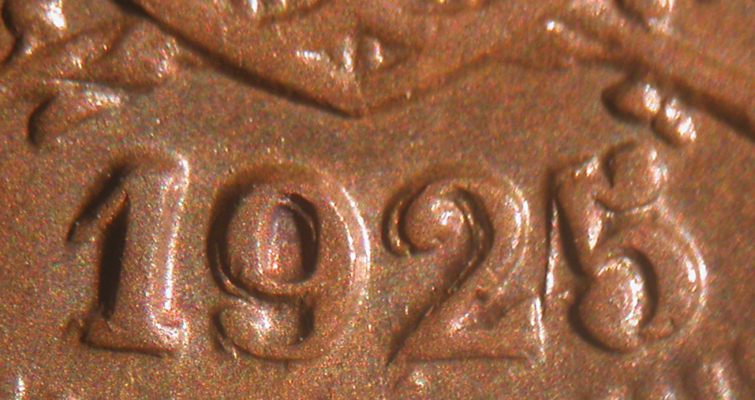 This Switzerland 1-rappen coin features a 1925/24 strong-over-weak overdate. The field surrounding the later date is no higher than elsewhere on the coin. 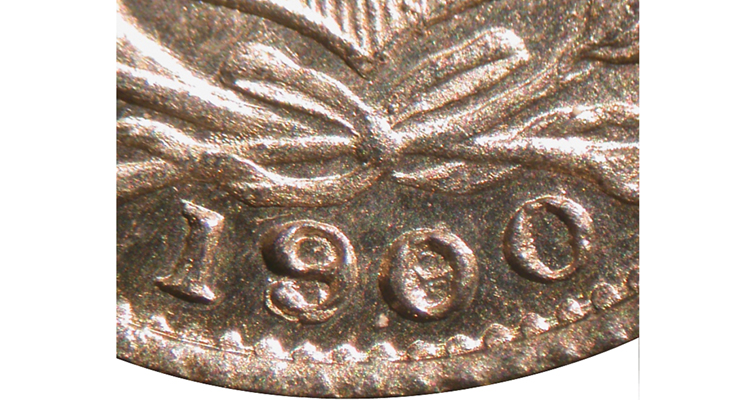 This Peru half dinero coin displays a 1900/1890 strong-over-weak overdate.
Previous
Next

The following is the Collectors' Clearinghouse column from the Jan. 23, 2017, issue of Coin World:

An overdate occurs when a date (or part of a date) is punched into a finished working die that already has an older date (usually that of the previous year). Kevin Flynn (in a personal communication) estimates that there are around 200 domestic overdates, most dating from before 1850. In many cases, overdates appear to represent expedient measures taken to address a shortage of dies or to avoid the labor required to fabricate new dies.

Overdates must be distinguish­ed from Class III doubled dies, an unrelated die variety that can also generate overlapping, mismatched dates.

Among domestic coins, the conditions necessary for the production of overdates ended in 1909, when the final Indian Head cents were struck. This was the last issue in which the date was punched into each working die by hand.

After that, the date was incorporated into the master hub or the master die. Mismatched, overlapping dates later than 1909 represent Class III doubled dies. One of the best-known examples is the 1942/1941 Winged Liberty Head dime.

In various other countries, the practice of punching the date into each working die continued into the late 20th century.

In many domestic overdates (especially the later ones), the earlier date appears thinner and smaller than the later date. This pattern also applies to foreign overdates, such as the 1925/1924 Switzerland 1-rappen coin and the 1900/1890 Peru half dinero shown here. The attenuated older date could theoretically result from a light application of each number punch (or multi-element logo punch). This is because, in most punches, the working end of each raised number defines a numeral that is smaller and thinner than the one defined by its broader base.

That said, it’s difficult to come up with any scenario in which a mint worker would choose to tap a shallow date into the die face. Most traditional explanations instead see the attenuated under-date as being caused by intentional abrasion of that area of the die face. As one grinds away the metal surrounding the recessed date, you eventually reach the level at which the numbers are at their smallest and thinnest. After that, a new date can be punched in.

The problem with this explana­tion is that such a grinding opera­tion should create a depression in the die face that would show up on the coin as a bulge. But no such elevation is ever seen.

A more extensive zone of abrasion would produce a larger, more gradual, and less obvious rise in the field, but would also result in loss and attenuation of adjacent design elements. This is also something we don’t see.

So there must be another explanation. I sent an open-ended inquiry to several die variety experts, and they presented several working hypotheses that might solve this riddle. No single hypothesis is applicable to all issues, nor would any one explanation necessarily apply to all overdates within an issue.

The Cherrypickers’ Guide to Rare Die Varieties of United States Coins (sixth edition) lists five strong-over-weak 1883/2 Shield 5-cent coin overdates. In addressing these coins, Bernus Turner suggests that the entire face of the working die was ground down to such an extent that only a trace of the original date was left. The nearly-featureless die was then annealed (heat-softened) and rehubbed with the Shield design. After that the later date was punched in over the earlier one. He further suggests that the abraded die face was left slightly convex in order to make hubbing easier and avoid radial bulging of the die neck. In his opinion, these efforts were primarily undertaken to salvage worn, damaged, and slightly cracked working dies.

Since none of the Shield 5-cent coin overdates are associated with a doubled die, this implies that the working hub was placed perfectly over the remnants of the original design during the later hubbing.

Kevin Flynn analyzed the four strong-over-weak overdates known for the Seated Liberty half dime (The Authoritative Reference on Liberty Seated Half Dimes, 2014). These overdates are restricted to the years 1848 and 1849, and in every case the final digit was punched over a 6. Flynn believes that, in each case, an 1846-dated working die was ground down (leaving a remnant of the 6) and then rehubbed with the same design (sans date). The later date was then punched in by hand.

After an exhaustive analysis, Flynn rejects all these scenarios and concludes that the vast majority of these overdates are actually Class III doubled dies. He argues that an incomplete first hubbing with an 1879-dated working hub (one that left the peripheral details like the date weak and incomplete) was finished up with a final hubbing using an 1880-dated working hub. 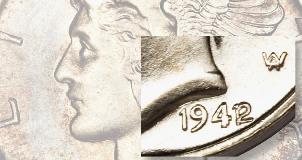 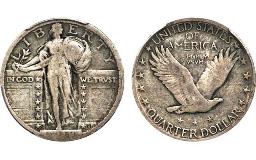 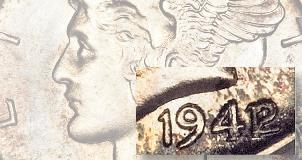