Over $1.5 Million in Judaean Coins sell in Shoshana II 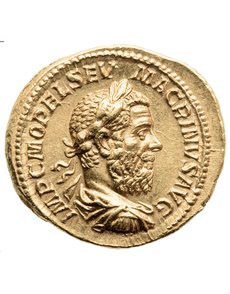 A magnificent gold Aureus of the Roman Emperor Macrinus, dated to 218 AD shattered pre-auction expectations, selling for $203,150 against a $40,000 estimate as a part of Heritage's auction of the Shoshana Collection of Judaean Coins, Part 2. Overall, this auction, held September 5 in conjunction with the Long Beach Coin and Collectibles Expo, brought prices in excess of $1.5 million, with post-auction buys continuing. All prices include a 19.5% Buyer's Premium.

Though the gold Aureus of Macrinus is not strictly speaking a Judaean-related coin, Macrinus’ reign took place entirely in the neighboring province of Syria. He assumed power after arranging for the murder of the hated previous emperor Caracalla. His reign was brief, lasting slightly over a year before he lost the support of the military and was executed. Gold coins of Macrinus are exceedingly rare, and this is a magnificent example, struck in high relief from dies of fine style and fully lustrous, grading choice extremely fine.

A superb year 4 silver shekel from the Jewish War (66-70 AD) sold for $65,725, more than doubling its pre-auction estimate of $30,000. Production of silver coins at the Jerusalem Temple appears to have dropped sharply in the fourth year of the Jewish War when supplies of precious metal dried up. While the number of recorded specimens for the first three years number in the hundreds, only 40 shekels are known from Year 4. The Shoshana Collection includes three year 4 shekels which number among the finest surviving examples. Two of these coins were offered in this auction, the other realizing $26,887.

A bronze prutah from Mattatayah Antigonus (40 - 37 BC), featuring one of the very few surviving images of the menorah of the second Jerusalem temple, also exceeded pre-auction expectations by selling for $56,762. At the time this coin was struck, the menorah and table were specific references to the Jerusalem Temple itself. It was only much later, after the Temple was destroyed by Titus in 70 AD that the use of the menorah as a symbol was expanded, and by the 4th-5th centuries AD the menorah had become a widely used symbol of Judaism itself, used on rings, seals, oil lamps, and synagogue decorations.

Silver selas from the 132-135 AD Bar Kokhba revolt proved very popular, as three such coins from the first year of the revolt crossed the auction block for prices exceeding $40,000. A superb example realized $59,750, while two examples grading Extremely Fine sold for $47,800 and $41,825 respectively. These rare coins are notable for their depiction of the holy ark within the Jerusalem temple.

Help us improve: Fill out this two question online survey about your experience.

P.S. Are you a HA.com member yet? If not, you can join using my Reference Number JS1192207, and you'll also get a complimentary book or auction catalog: HA.com/Join