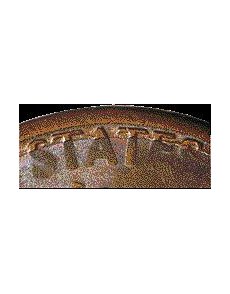 Increased planchet thickness in the area of the ring resulted in a sharper strike on the 1984-D Lincoln cent. The upper portions of the letters of STATES are very well struck where they overlap the ring while the lower portions are weak. 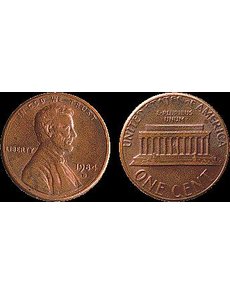 This 1984-D Lincoln cent was struck on a planchet that was probably damaged before it was plated with copper. The damage generated a thin apron that was eventually struck into the coin. 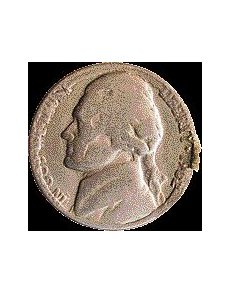 A coin that has tumbled for a long time in the fins of an industrial dryer will end up looking something like this 1962-D Jefferson 5-cent coin. Both faces have turned to mush, while a thin apron of metal has been pushed over onto the peripheral letters and field. 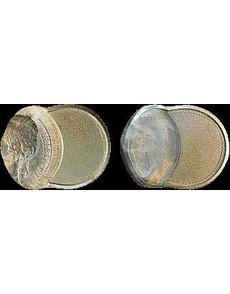 A few weeks ago die-variety authority and dedicated roll-searcher Robert Piazza sent me a 1984-D Lincoln cent with an unusual planchet error.

On each face (mainly on the left side) a partial ring of metal extends in from the design rim and terminates internally at a narrow fissure. On the obverse face the half-ring extends clockwise from approximately 4:00 to 11:30. On the reverse face it extends clockwise from 6:00 to 12:30. The presence of the fissure, and the fact that the ring is flush with the interior field, indicates that the ring was struck into the coin.

Occasionally the thin copper plating (present on cents from 1983 to the present and some 1982 cents) will crack just inside and parallel to the design rim. But I quickly rejected this prosaic explanation when it became clear that the planchet was originally thicker at the site of the ring. The increased thickness resulted in a locally stronger strike. This is best seen in the letters of STATES. The upper parts of the letters, which overlap the ring, are very well-struck, while the lower parts are weakly struck. The aforementioned fissure separates these two areas.

A scenario involving pre-strike damage best explains this coin’s appearance. The edge of the planchet (or blank) was battered or squeezed, causing some of the metal to be relocated onto each face in the form of a thin apron that was later struck into the coin. The damage probably occurred prior to plating; otherwise some of the zinc core would have been exposed.

This type of damage usually occurs after the strike and is most often seen in abused coins that have tumbled around the fins of an industrial dryer. An example of such a “dryer coin” is shown here in the form of a 1962-D Jefferson 5-cent coin. The obverse and reverse designs have been pummeled into mush. Some metal has been relocated from the edge and design rim onto the field and peripheral letters in the form of a thin apron. The apron forms a complete ring that lies loosely on each face.

I doubt that the planchet represented by Piazza’s coin tumbled around a clothes dryer before it returned to the production stream to be plated and eventually shipped to the Mint. Some other piece of machinery must have been responsible.

I am aware of at least one precedent for Piazza’s coin. It is an off-center Jefferson 5-cent coin struck some time in the 1980s. Although its size, weight and density are unremarkable in comparison to other copper-nickel 5-cent coin planchets, its appearance is bizarre. The color is a leaden gray, and the interior has a fine, uniform, matte texture that is devoid of tumbling marks. A thin, pleated apron of metal extends in from the planchet’s proto-rim on both faces.

The proto-rim itself is quite odd, and I suspect both it and the apron formed simultaneously. The proto-rim shows no damage. The internal margin is sharp and its upper surface takes the form of a wide, flat, gently sloping plane that almost appears to be machined. The sloping surface meets the planchet’s smoothly rounded edge at an abrupt junction.

It might be that this is not a proto-rim at all. Instead of being generated by an upsetting mill, it might instead be circumferential damage produced by a very different mechanism.

I have no confidence that this planchet was even intended for a Jefferson 5-cent coin. It might well be an orphan off-metal/wrong planchet error, struck on a planchet of uncertain purpose.