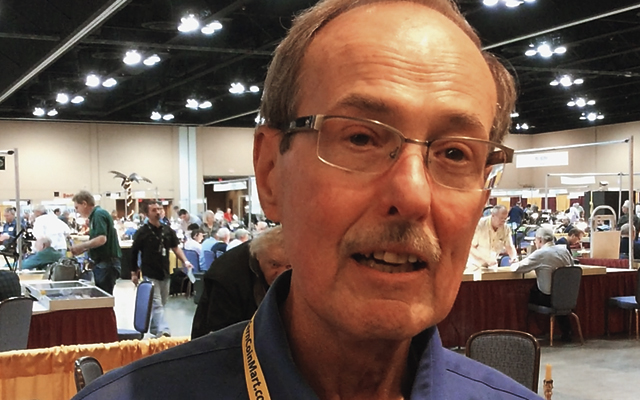 The 2014 Central States Numismatic Society (CSNS) Convention in Schaumburg, Ill., last week featured a passing of the baton to a new CSNS president.

James Moores presided over his final CSNS meeting as president on Friday morning before handing leadership over to Bruce Perdue, an Illinois resident who was elected president after serving as the society’s vice president under Moores.

Moores, a Missouri resident, served as president for two years.

The outgoing president discussed in a statement posted on the CSNS website highlights of his presidency, including the advancement of CSNS educational programs, increased board-member presence at coin shows within the 13-state CSNS territory, and an improved website.

“As I think about the past two years, CSNS, in large measure, has moved forward in a positive manner,” Moores said.

Among the “unfinished” CSNS projects, according to Moores, are the expansion of the scope of member surveying through the Surveys and Feedback Committee, continued publicity for open CSNS positions, and revision of governing bylaws so that they are in line with best practices.

“In Bruce’s tenure on the CSNS Board, he has been involved in key educational, convention and technology initiatives,” Moores said. “He is the CSNS Webmaster and has worked diligently to assure a highly effective, up-to-date website.

“Lastly, let me say again that I am always aware that it is a privilege and honor to serve our 75-year-old organization,” Moores concluded. "I will do my best to continue to do so in the years ahead."