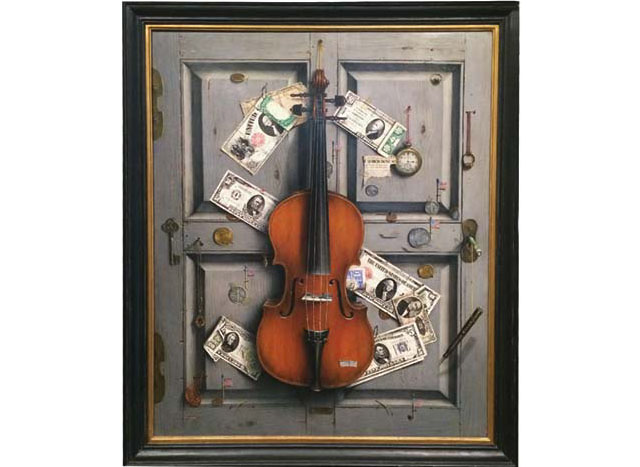 Otis Kaye’s complex paintings such as U.S. Musical Notes from the 1940s often have titles that contain plays on words. Here, notes refers to both bank notes and musical notes. 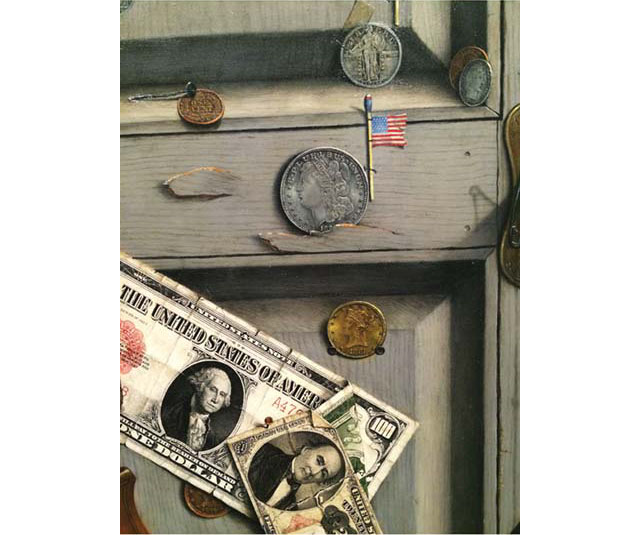 In the detail image one sees various coin types including a Morgan dollar, a Standing Liberty quarter dollar and the reverse of an Indian Head cent. 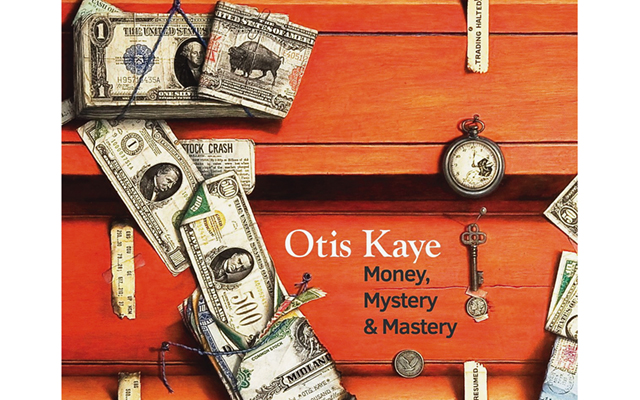 An exhibit titled “Otis Kaye: Money, Mystery, and Mastery” runs though May 10 at the New Britain Museum of American Art in Connecticut.

The show includes 34 of Kaye’s paintings in the artist’s signature trompe l’oeil technique and is of interest to numismatists because he often used coins, paper money and other items as symbols in his realistic still life paintings to represent greater political and social issues.

The term “trompe l’oeil” is a French term that means trick or fool the eye. It is the name for a painting style that is highly realistic and utilizes optical illusions so that the viewer is unsure of what is painted and what is real.

As the museum states, “More puzzling than Kaye’s work, which is steeped in mystery and symbolism, is the enigma that surrounds the artist himself. The record of Kaye’s life is nearly non-existent. The artist did not exhibit or sell his work during his lifetime, but gave his art to close family and friends.”

Kaye was born in Dresden, Germany, in 1885 and moved to Michigan as a toddler. There is almost no documentation to confirm the simplest facts of his life, such as a birth certificate or documentation of his entry to America.

He appears to have started painting trompe l’oeil oil paintings for his own amusement in the 1920s. As he developed as an artist, his paintings became increasingly complex as they evolved to reflect the artist’s ideas on social issues. Sometime after 1969, Kaye returned to Germany, and he died there in 1974. During his lifetime he enjoyed a local reputation in the areas where he lived, including the Chicago area, but widespread success eluded him.

A 188-page catalog of the exhibition has been published by the museum and is being distributed by University Press of New England. The introduction describes the enigmatic artist’s works: “To look at a still life by twentieth century artist Otis Kaye is to enter a world filled with minute details. Seduced by the painting’s semblance to reality, its beckoning illusionism, the viewer moves in to examine object after object, scrap after scrap, discovering clues, texts, and felicitous arrangements that portray pithy morals and bitter truths.”

The catalog also includes an appendix that documents almost all of the artist’s artistic output, making it a sort of “catalogue raisonné,” or inventory, of the artist’s works. According to the catalog authors, documenting the “full breadth of Kaye’s output in all media allows us to assess Kaye’s enormous technical skills, the complexity of his allusions, the diversity of his interests and his strengths and weaknesses as an artist in different media.”

Surprisingly, though Kaye’s paintings of money are best-known today, these were not popular with his family members, who did not hang the money paintings in their home, since they were viewed as not sufficiently decorative.

Check back later for more on the robust market for Kaye's work.