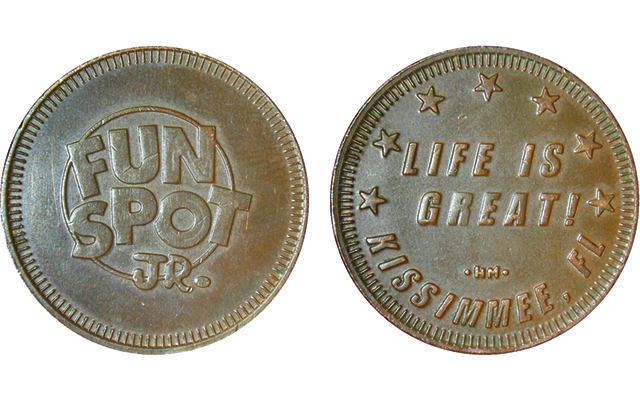 This amusement token, found during roll-searching, was produced for use at the Fun Spot Jr. arcade in Kissimmee, Fla., which is affiliated with the business Fun Spot Amusements in Orlando and Kissimmee.

A recent conversation with an active roll searcher reminded me that I should occasionally take the opportunity to point something out. The fact is that what he described as his method of looking through cent rolls threw me for a little bit of a loop.

Simply stated, he told me that he removes the coins from their wrappers, looks for Wheat cents, replaces what he keeps with “normal pennies” and then rerolls the coins to bring them back to the bank.

It turns out that his limited success in finding any “keepers” had almost driven him into numismatic extinction more than once in the past and he was again on the brink of giving up.

Understanding his frustration, we talked about his urge to quit our beloved hobby and move on to something else like modeling ships on the inside of wine bottles.

While that could be a fascinating endeavor, I explained to him that there could be much more to roll searching than looking for Lincoln, Wheat cents, if he was willing to expand his horizons to include other areas of numismatics in the pursuit of his hobby.

Temporarily excusing myself from my friend’s presence, I retrieved a three-ring binder, full of fun finds and quickly returned. I placed the binder in front of him so that he could examine it at his leisure but he wasted no time in opening it.

Each page in the binder displayed 20 coins in cardboard 2-inch by 2-inch holders, thus allowing the binder’s contents to be organized into sections. I had divided the pages to exhibit error coins, die varieties and tokens, all of which I found in rolls. I had his attention!

Added to the binder was this month’s featured find! It is an arcade token manufactured by The Hoffman Mint in Fort Lauderdale, Fla. The HM Mint mark is visible just above KISSIMMEE, FL. Struck in bronze, this token has a diameter slightly larger than that of U.S. quarter dollar.

This token is for use at the Fun Spot Jr. arcade in Kissimmee, which is affiliated with Fun Spot Amusements in Orlando and Kissimmee.

The point, of course, is that there is more to look for than meets the eye as you search through rolls. Errors, die varieties and tokens are but a few of the possibilities!