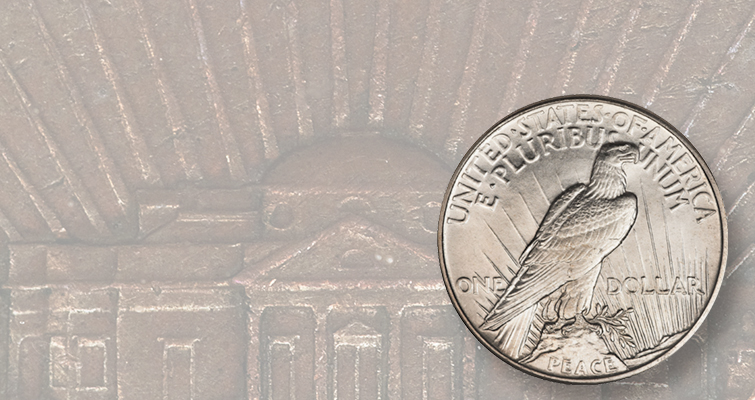 Anthony de Francisci was working on other projects while creating the designs for the Peace dollar some of the details used on the silver dollar were taken from other works. 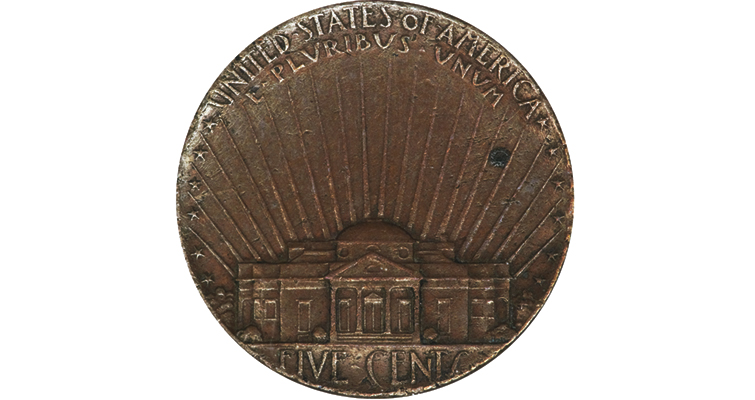 De Francisci used rays as a motif in many of his numismatic works, including his proposed design for the reverse of the 1938 Jefferson 5-cent coin competition. 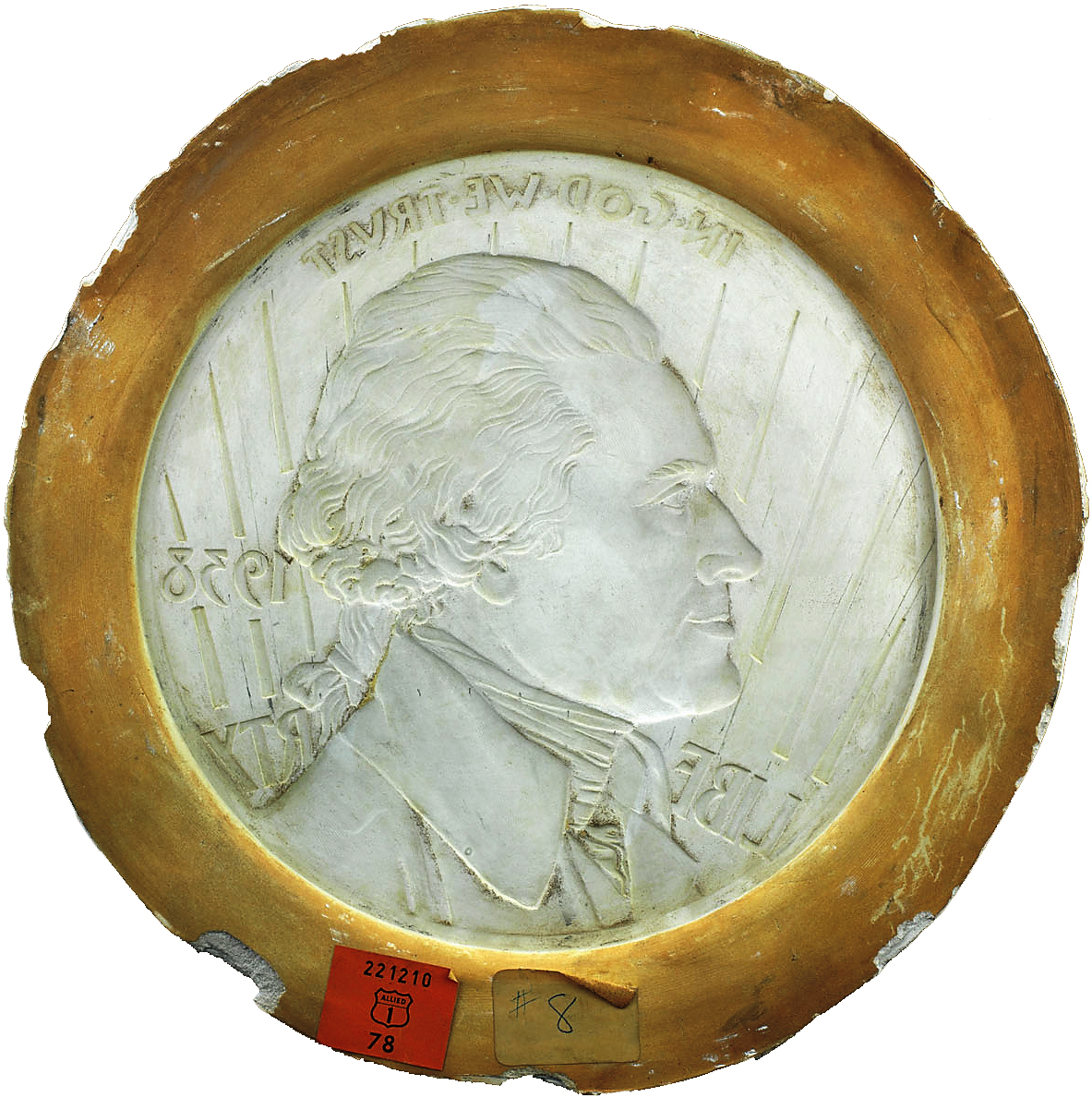 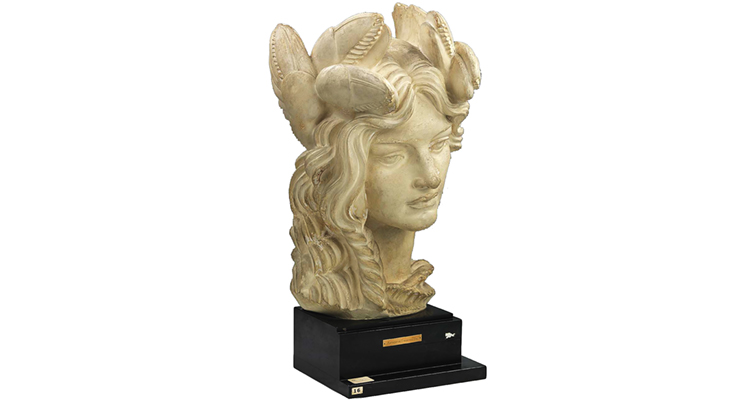 This undated sculpture by de Francisci, Memory is typical of his sculptural output and in it one sees some of the features that characterize the Liberty on his Peace dollar. 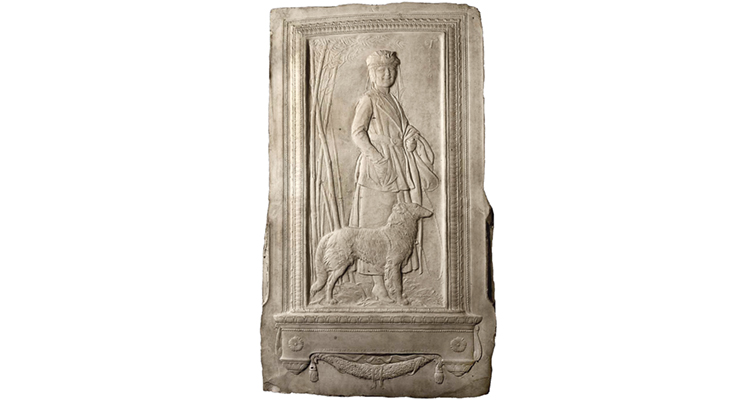 A 1920 relief by the artist depicts his new bride in contemporary fashion popular during the era, although a detail of the plaster model shows little resemblance between the figure and the elegant lady on the Peace dollar.

De Francisci’s Peace dollar design shows parallels to his other work. The use of visible sun rays is a motif that he used in many designs, including those he prepared for the 1938 Jefferson 5-cent competition that he lost to Felix Schlag.

De Francisci was born in Palermo, Italy, in 1887 and moved to New York City in 1903, studying at the Art Students League with James Earle Fraser. He learned his craft as a studio assistant to Fraser, MacNeil and Weinman and supported his commissioned work with teaching at Columbia University, among other places.

The Peace dollar has a unique place in de Francisci’s oeuvre. His medallic work overwhelmingly reflects the commissions he received at the time, which often required formal, profile portraits of middle-aged and older men. His Peace dollar, however, shaped later coin designs, as Cornelius Vermeule wrote in his 1970s opus Numismatic Art in America, “The slick modern aura, a soft and worn look to the obverse even before the coin had circulated, paved the way for many similar experiences in the commemorative coinage between the two World Wars.”

Vermeule was not particularly fond of the obverse, calling it weak, “Because an element of prettiness permeates the head of Liberty — an emptiness of face, an elaborateness of hair, and an overall glossiness that adds up to nothing beyond the thick rays, the meaningless locks out behind, and a vapid lower jaw.”

Contemporary critics were more fond of the design, with Vermeule citing one contemporary newspaper review that wrote, “The young woman who has been adorning silver currency for many years has never looked better than in the ‘cartwheel,’ which the Philadelphia Mint has just started to turn out. The young lady, moreover, has lost her Greek profile. Hellenic beauty seems to have suggested divine wisdom, courage, ardor and serene confidence in the triumph of freedom.” Yet, that review ended by suggesting that Liberty lacked gravitas.

Throughout his life de Francisci stated that his wife served as a model, although Vermeule concluded, “Whether the graceful profile of Mrs. De Francisci, or indeed, any pretty young lady’s face was needed to create the proper sculptural mood is a point that will always remain open to speculation.” Surely the comparisons flattered his wife, who looks gorgeous on the Peace dollar, in stark contrast to de Francisci’s 1920 large bas relief depicting a full-length representation of his wife, in a fashionable sporting outfit and head wrap, looking at the viewer.

A comparison of the facing head on the 1920 bas relief and the 1921 Peace dollar leaves little doubt as to which visual representation of herself Mrs. de Francisci likely preferred.