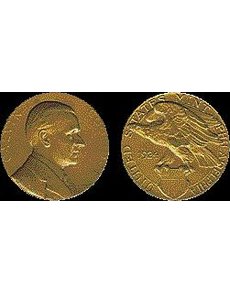 Do you know anything about this 1924 Calvin Coolidge bronze medal?

Were these medals sold at the Philadelphia Mint during his presidency? How many were made and sold? How much are they worth? Were medals like this one made for other U.S. presidents?

Much remains to be discovered about this medal and similar pieces. In response to an email query, David Alexander of Stack’s Bowers Galleries writes:

“You touch upon a recurring mystery that I’ve pursued since the 1980s.

“This Coolidge medal is one of several Presidential portrait medals in the 33.5 to 34-mm range bearing busts of Harding, Coolidge, Hoover, Roosevelt and Truman (there may be earlier chief executives as well). All bear the eagle on shield or Mint façade reverses.

“[Stack’s] offered 15 of them from the Ernest Keusch Collection in November 2008. Keusch was the ‘Grand Old Man’ of U.S. Assay Commission Medals, which were the stars of that busy sale.

“It seems most likely that these mysterious presidential U.S. Mint medals were made to sell to visitors to the U.S. Mint. We have sold them at $25 to $75 at auction.”

Alexander further states that no one is certain how many were made or at what amount they were originally priced.

In addition to the Keusch auction, a lot of 24 medals, featuring Presidents Warren Harding, Coolidge, Herbert Hoover, Franklin Roosevelt and Harry Truman, and having the Mint façade or the Defiant Eagle reverse (as shown on the medal illustrated above), sold in a January 2007 Heritage Auction Galleries sale for $115.

In the Dec. 19 Coin World, Ron Thompson of West Milton, Ohio, asked “Readers Ask” about his copy of A Guide Book of United States Coins (also known as the “Red Book”) which featured the embossed name “John R Slusher” on the front cover.

“Your guess is probably correct as to why and how, but I think that it [is in] reference to [Slusher.] He had a very broad knowledge and huge experiences regarding numismatics.”

Lee Hornbeck of Washougal, Wash., also confirmed the identity of Slusher via telephone.

Others who wish to provide information about this book or Slusher may contact “Readers Ask.”