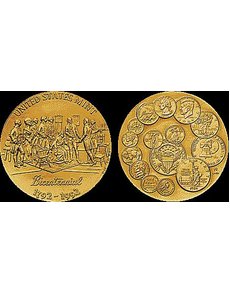 The U.S. Mint struck commemorative bronze medals on the occasion of its 200th anniversary in 1992. The obverse features nine historical persons, while the reverse depicts 15 different U.S. coins.

Any help you can provide on the origin or history of this medal would be appreciated.

Mr. Bassett’s piece is a 1992 bronze medal struck by the U.S. Mint in honor of the Mint’s 200th anniversary.

The medal was issued in two different diameters — a 3-inch version and a 1.5-inch version. The Mint no longer sells the medals, but examples may be found on Internet auction websites such as eBay.

According to an April 20, 1992, Coin World news story: “Donald Miller, a police officer at the Philadelphia Mint, provided the winning obverse design and Lauren Vaughan, secretary to the Office of Public Information at Mint headquarters in Washington. D.C., contributed the winning reverse design. Miller’s and Vaughan’s designs were selected from those submitted in a design competition among Mint employees.”

Frank Gasparro, retired as chief engraver of the U.S. Mint, though still active, sculptured the original artwork for the obverse, based on his design for the reverse of the 1965 Assay Commission medal. Mint sculptor-engraver Thomas Rogers sculptured the reverse.

The obverse of the medal is based on a 1914 oil painting by John Ward Dunsmore titled Inspecting the First Coins. On the medal’s reverse, Martha Washington sits before a tray of silver coins held by Mint Chief Engraver Henry Voigt. She is joined by President George Washington, Washington’s private secretary Tobias Lear, Secretary of State Thomas Jefferson, and Treasury Secretary Alexander Hamilton and his wife. Mint Director David Rittenhouse offers a coin from the tray for Martha’s inspection. Mint Engraver Adam Eckfeldt is shown at right, operating a coin press.

The reverse of the medal features a collage of obverse and reverse designs of 15 different U.S. coins.