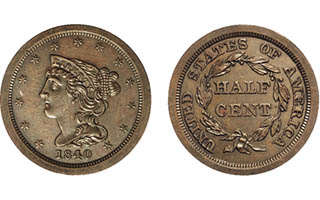 An Original Proof 1840 Braided Hair half cent, struck at the time of the date that appears on the coin, was made for presentation and collector sets.

Coin World’s  Feb. 17 Editorial brought up the proprieties behind the release into circulation of the 1974 aluminum cents, the 1913 Liberty Head 5-cent coins and the 1933 double eagles.

I have long wanted to ask Coin World under what circumstances the very scarce (and pricey) Proof 1840 to 1849 Braided Hair half cents were produced. Might they have been presentation gifts to members of the United States Congress?

According to Mark Borckardt, senior numismatist/cataloger for Heritage Auctions, the series of Proof half cents dated 1831, 1836, 1840 through 1849, and 1852, exist in three general classifications.

“Original issues were struck at the time of their individual dates,” Borckardt says. “Those are the pieces that were included in special presentation sets of coins for dignitaries, or for advanced coin collectors known to Mint officials.

“First Restrikes were minted in the late 1850s, generally all at the same time, and were included in sets for coin collectors also known to Mint officials of that time.

“Sets [of First Restrike pieces] may have also been prepared for special presentation purposes, but they were mainly produced for collectors.

“Second Restrikes were most likely minted in the late 1860s or early 1870s, for the same purposes as the First Restrikes.

“The First and Second Restrikes were produced by Mint officers whom Breen [Walter Breen’s Encyclopedia of United States Half Cents 1793-1857] called the ‘Midnight Minters,’ suggesting that they secretly produced these items for personal gain.

“I completely disagree with that theory and believe that they were openly minted and sold, or in many cases traded for other coins needed to enhance the Mint coin collection that is now in the Smithsonian Institution [National Numismatic Collection].

“We know, for example, that Matthew Stickney actually traded with the Mint for that exact purpose in the 1840s.”

Another early U.S. copper specialist, Bob Grellman, adds: “I believe some of the Originals were restruck before 1857 (using the original dies of course) to satisfy demand when supplies ran out. You can see subtle but distinct differences in the original strikes for some years, and this suggests a resumption of striking after a hiatus.