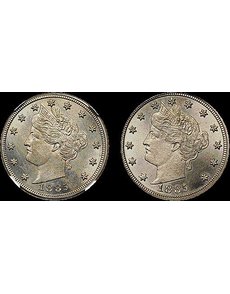 The 1885 Liberty Head 5-cent coin is a rare date. The one at left is certified Mint State 62 and stickered by Certified Acceptance Corp. as exceptional for the grade. The other is graded MS-65 and costs multiples more. Bowers suggests that value is to be found in cherrypicking lower grade Mint State coins. What do you think?

After scanning some of the valuations in the “U.S. Coin Values” section of the Nov. 5 issue of Coin World, I was reminded once again that sometimes a small difference between grades can make a very large, even huge difference in price. In several of my Whitman Publishing LLC books, I have pointed out the Optimal Collecting Grade, or OCG, in which a high-level coin can be purchased at a value that is a sharp discount from a coin that is one notch above it.

It is well known that huge numbers of coins graded, for example, Mint State 64, have been resubmitted to Professional Coin Grading Service and Numismatic Guaranty Corp. and have been graded MS-65 or MS-66. As grading is, has been and always will be a matter of subjectivity and opinion, being a careful buyer and keeping an eye on OCG can be profitable for knowledgeable cherrypickers.

You can gain a tremendous monetary advantage by studying prices, such as those posted in Coin World’s Coin Values, and picking a grade that is just slightly lower but is much cheaper. In many instances, experts cannot tell the difference between the two grades, as noted. Otherwise dealers and others would not be continually gaming the system with resubmissions.

Taking a few random examples, for the 1864 Indian Head, Designer’s Initial L cent, the Coin Values price for MS-65 red and brown is $1,600, and for MS-65 red, $6,325. For MS-66 red, examples have sold for more than $30,000. Recently, I purchased from Rick Snow of Eagle Eye Rare Coins an MS-65 red and brown Indian Head cent that had more “red” on it than others certified as red. Conversely, many red coins have a fair amount of brown. Assuming I found a nice MS-65 red cent that was fully red and without spots or other problems, I would rather have it for $6,325, than an MS-66 red 1864 Indian Head, Designer’s Initial L cent for five times the price.

By cherrypicking MS-63 coins, you will in some instances find coins with better visual appeal than MS-65 or MS-66 pieces. Besides, isn’t it more fun to have dozens of MS-63 coins for the price of a single MS-66?