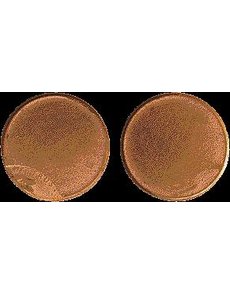 Two weak off-center strikes were delivered in tandem to this copper-plated zinc cent planchet. Only the obverse design is visible on this “saddle strike.” 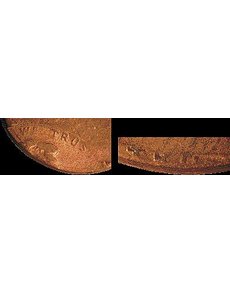 Close-up images of the two off-center strikes show obverse lettering present at the 1:00 clock position — the head-to-head arrangement characteristic of all saddle strikes from the copper-plated zinc cent era. 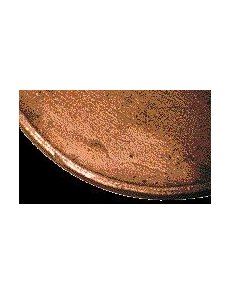 A close-up of the reverse face opposite the larger of the two off-center strikes shows an odd array of raised cloudlike features.

For a die to leave an impression on a planchet, its impact must be resisted by a countervailing force applied to the opposite face. Admittedly, a few error types do manage to circumvent this rule.

In stutter strikes (Types II and III) and extrusion strikes, the necessary resistance is applied indirectly (Collectors’ Clearinghouse, Oct. 24). Ejection impact doubling — a form of post-strike design transfer — also steps around this requirement (Collectors’ Clearinghouse, Aug. 1 and Aug. 29, 2005). But no such end around can be invoked in the case of an unusual double-struck Lincoln cent recently sent to me by a collector who operates under the name “Chef Ito.”

The coin is a saddle strike (tandem strike). The planchet received simultaneous off-center strikes as it straddled the gap between two striking chambers. Both off-center strikes were very weak and only the obverse face shows die-struck design elements.

The larger of the two strikes shows the top of Lincoln’s head and the words WE TRUST. The smaller strike is located at the opposite pole and is confined to the planchet’s proto-rim. Parts of the letters TRUS are visible. No die-struck design elements appear on the reverse face at either pole.

As weak as these two obverse impressions are, an equal amount of resistance must have been applied to the reverse face. And indeed, a closer look at the area opposite the larger off-center strike reveals a series of faint, raised impressions that resemble the billowy top of a cloud bank. They do not resemble any part of the reverse design. The section of the reverse proto-rim lying opposite the smaller off-center strike shows no disturbance at all. And yet, something must have resisted the light impact of the obverse die here as well.

While there is no way to securely establish the source of resistance to the impact of the two obverse dies, it’s possible to come up with some plausible scenarios.

Any scenario ought to assume the planchet was backed by an object or substance softer than die steel. It should also assume that the material that blocked the reverse die was of similar thickness in each striking chamber. A strike this weak would almost certainly have been due to insufficient die approximation (excessive minimum die clearance). Die clearance would likely be similar in each striking chamber as the two die pairs operate in synchrony.

It’s possible that both reverse dies were clogged with a compacted mixture of metal dust, dirt and lubricant, a material hobbyists refer to as “die fill” or “grease.” If soft enough, the grease would tend to preserve the proto-rim of the planchet and the latter’s streaky surface appearance. Firmer areas of “grease” can leave odd textures on a coin, which might account for the cloudlike impressions.

A second possibility is that both reverse dies were blocked by planchets. In other words, we could be looking at two off-center uniface strikes. A saddle strike involving two uniface strikes is rare, but they have been recorded. Ordinarily, I would have expected any planchet lying beneath the larger of the two off-center strikes to have left a weak impression of its proto-rim in the form of a shallow, curved groove. However, this would not be the case if the planchet was imperfectly aligned with the edge of the reverse die but instead extended farther into the striking chamber. The cloudlike impressions are a sticking point, but could reflect damage to the upper surface of the planchet.

A related scenario would have one or both reverse dies blocked by weakly struck coins. If very little of the design was present, the effect would be similar to that of a uniface strike. I don’t view this as likely, since the raised cloudlike formation is incompatible with any sort of brockage.

A final possibility involves foreign objects blocking each reverse die. It doesn’t seem likely that two foreign objects of similar thickness would block two adjacent reverse dies, but stranger things have happened. This scenario at least provides a reasonable explanation for the irregular pattern seen on the reverse face opposite the larger strike.