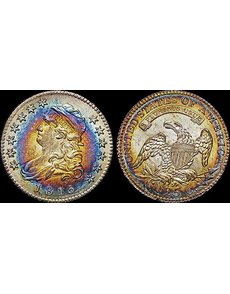 This 1815 Capped Bust quarter dollar from the Newman Collection has natural target-rainbow toning that is often imitated artificially.

Nothing can replace actually looking at coins to understand grading and the overall look of a coin that is considered “original” in the marketplace.

A prior generation of dealers had the opportunity to learn originality by looking at old collections that were established over time, with coins that were allowed to mellow over decades. Those opportunities are quickly vanishing and are rare encounters for today’s collectors.

Several weekends ago, I took the opportunity to view the upcoming Heritage auction featuring more than 1,800 coins from the Eric P. Newman Collection, which is set to be sold Nov. 15 to 16 in New York City.

The collection was put together over a period of 90 years, and the bulk of the holdings was purchased decades ago. It presents a broad study in the various “looks” that coins (mainly silver, but also copper-nickel) can have when left alone for decades.

Hundreds of gorgeous coins in the mix are illustrative of a wonderful sort of magic occurring over time as a coin reacted to its environment. The mix also holds coins where chemistry did not necessarily agree with today’s aesthetics that define what makes a coin attractive and marketable. Some coins would be considered original by the marketplace, but are toned in dark or uneven palettes that may not be to everyone’s taste.

For better or worse, many of these coins with negative or marginal toning are likely to be stripped of their color. In this process, they become more marketable, but much of a coin’s history is lost.

Still, these “stripped” coins may one day retone and educate a future generation of collectors. Many coins from the cabinet of Egypt’s King Farouk were scrubbed bright at one point, but they’ve toned over time and the cleaning is much less offensive now.

The key to distinguishing between natural toning that has been established over time and mechanically applied toning that’s considered artificial in the marketplace is to look at coins from old collections that have been allowed to age and react with their environment over time.

The process of viewing old collections like Newman’s is something that is irreplaceable in a coin collector’s education. As more collections get sold and broken up, the opportunity to view an old-time collection with coins that have not been spruced up to meet current market tastes is becoming rare.