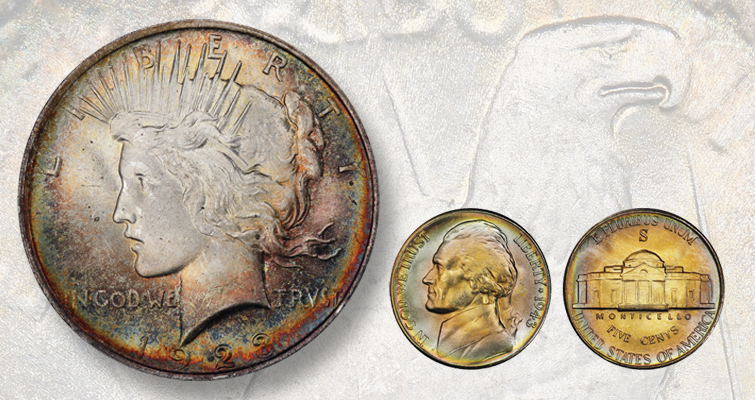 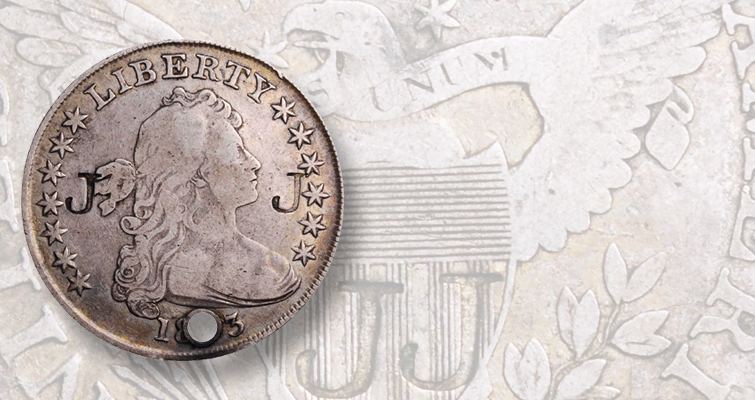 An 1803 Draped Bust silver dollar with a hole through the date and the letters “J J” prominently stamped on both the obverse and a reverse provides a research opportunity for this mark that is unlisted in references on countermarked coins. 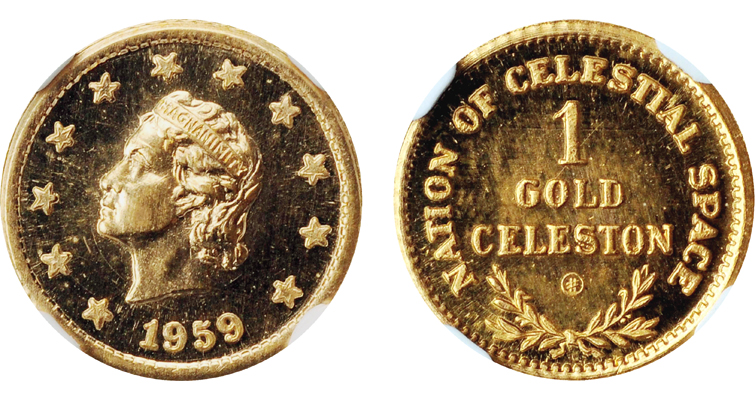 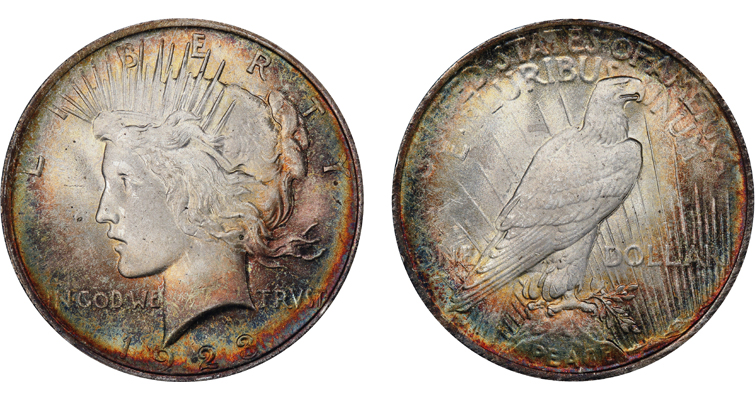 While the 1923 Peace dollar is one of the most common dates in the series, PCGS has graded just 313 in MS-66+ with 108 finer. The great eye appeal of the coin is expected to impact bidding. 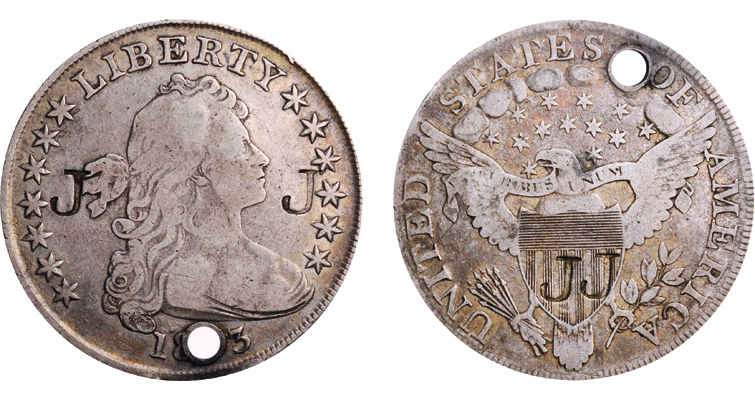 The counterstamp on both sides of the 1803 is one that has defied discovery, presenting an opportunity for research by a new buyer.

These online sessions can offer more affordable options for collectors.

Heritage’s website allows users to rank lots by “Most Popular (Views)” and it turns out that visually exciting collector coins in high grades with beautiful toning factor heavily in the most popular lots.

One of the most visited coins among all the Heritage offerings is a 1923 Peace dollar graded Mint State 66+ by Professional Coin Grading Service with gorgeous rainbow toning that is rarely seen on the design type. Deep, warm orange hugs the obverse rim with sea-green, lavender and honey accents, while Liberty’s profile is nice and frosty. The reverse is similarly toned.

While the 1923 Peace dollar is one of the most common dates in the series, PCGS has graded just 313 in MS-66+ with 108 finer. Typical examples sell for $600 to $700 at auction today, but this one has eye appeal that may help it soar past recent auction comparable sales.

Another toned stunner is a 1943-S Jefferson 5-cent piece of the World War II era composition of 56% copper, 35% silver and 9% manganese that was used to help reduce the use of nickel, a metal that was needed for the war effort (the pre-war alloy was 75% copper and 25% nickel).

The presence of silver means that many of these “wartime nickels” have pretty toning, as seen on this one graded MS-67+ full steps by PCGS that is one of 191 in this grade with three finer. Both sides show a range of blended pastel colors, with more intense jewel tones at the rims. Consistent with the PCGS definition of “full steps” the reverse shows five separated steps (lines) at the base of Monticello. An untoned, comparably graded example brought $720 at a Heritage auction earlier this year, but collectors seem to be responding favorably to the attractive colors on the offered lot.

Stack’s Bowers Galleries’ online sessions have some wonderfully odd items, like a selection of U.S. counterstamped coins that were marked by merchants in the 18th and 19th centuries. Many of these have been cataloged by Russell Rulau and more recently in Gregory Brunk’s book Merchant and Privately Countermarked Coins, but some marks remain mysterious and the collecting area is ripe for research.

An 1803 Draped Bust silver dollar is graded Very Good by the auctioneer, while a neat hole obscures much of the 8 and all of the 9 in the date. The obverse features the letters “J J,” prominently stamped on either side of Liberty, and again on the eagle’s shield on the reverse. As of Aug. 2 it has a current bid of $160, which is sure to be exceeded as the Aug. 23 closing date approaches.

Also closing on Aug. 23 is a gold 1959 Nation of Celestial Space 1-Celeston piece, struck on a 90% gold planchet and measuring just 14 millimeters across. The Nation of Celestial Space was chartered in 1948 by James T. Mangan of Evergreen Park, Illinois. The portrait is of his daughter Ruth Mangan and draws from traditional 19th century U.S. gold coin design, replacing the headband’s LIBERTY with the word MAGNANIMITY. It is graded Proof 65 Cameo by Numismatic Guaranty Corp.

Mangan was committed to protecting “outer space” from colonization from a single country. He died in 1970, effectively ending the movement, but his efforts are remembered in his gold and silver issues. 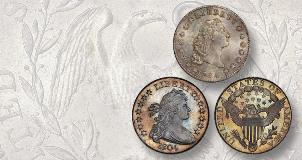 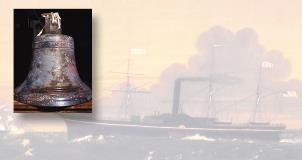 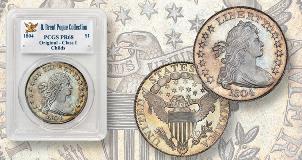