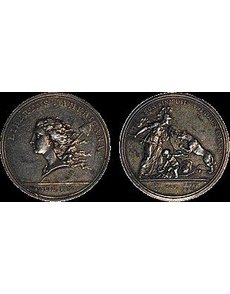 Although collectors often associate online auctions with lower-end coins, a robust market exists for higher-end material, as evidenced by the sale of this 1781 Libertas Americana medal for a bid of $70,000 at GreatCollections.com.

Around five years ago Sotheby’s made a business decision to sell fewer lots but concentrate on lots of higher quality. The international auctioneer decided to largely abandon the $5,000 and below end of the market, focusing not on lot volume, but on the expensive items that were more profitable for the business.

That decision provided a greater stream of material for local and regional auctioneers, who generally welcomed the mid-range items and the occasional high-end item that came in as part of an otherwise modest collection.

As part of this shift in business strategy, Sotheby’s raised its buyer’s commission from 20 percent to 25 percent for items that cost $20,000 or less. Later the fee policy was adjusted to 25 percent for the first $50,000. In the past year, several major U.S. coin auction houses moved their coin buyer’s fee from 15 percent to 17.5 percent for most coins.

Collectors are increasingly utilizing lower-fee firms like Teletrade and GreatCollections as alternatives to buying and selling coins.

Teletrade offers a flat 15 percent buyer’s fee per lot with an $8 per lot minimum fee. The firm is a member of Spectrum Group International, which also owns Stack’s Bowers. GreatCollections offers a buyer’s fee of 10 percent with a minimum fee of $5 per item.

But these firms don’t just focus on the low end. Both have succeeded in attracting high-end consignments recently.

For example, on June 3, a lone bidder on GreatCollections captured a 1781 Libertas Americana silver medal — perhaps the most popular early American medal — graded About Uncirculated 50 by Professional Coin Grading Service for a bid of $70,000.

These firms fill an interesting role in between online auctions like eBay and traditional full-
service auction houses.

Teletrade alone offers 25,000 to 30,000 coin and paper money lots each month and collectors have taken to the increased buying opportunities that these online auction houses provide. Further, as these two auctioneers grow and compete, their level of service and quality may keep improving, helping all collectors. ¦