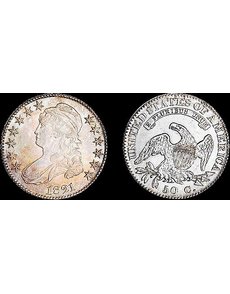 This 1821 Capped Bust half dollar is an example of a one-sided Proof piece, where the obverse only displays all of the characteristics of an early Proof coin. The reverse displays the attributes of a circulation strike.

In the second 2012 issue of the American Numismatic Society Magazine, I read the following under the heading for new acquisitions:

“A remarkable Capped Bust half dollar ... of 1821 was donated by Barbara Phillips. It is a good example of a ‘one-sided proof’; the obverse displays all the flashing field and needle-sharp, meticulous detail of a true proof coin, while the reverse offers virtually pristine steely blue toning over surfaces that are wonderfully smooth but lacking the mirror reflectivity of a full proof strike. Researchers have long been puzzled over such coins, with some suggesting that the pieces were made for display in old-time coin cabinets with the obverse uppermost.” The coin is the Overton 105 variety (Early Half Dollar Varieties: 1794-1836 by Al C. Overton and Donald Parsley).

Walter Breen, in his Encyclopedia of U.S. and Colonial Proof Coins, defines a “one-sided proof” as: “A coin minted by normal proofing process except that the reverse die remained unpolished.”

I had also wondered about these “special” coins for some time, until recently. I was at a major convention and was able to view a complete boxed 1836 Proof set at the Rare Coin Wholesalers table. The owner, Steve Contursi, was kind enough to give me access to the set for examination.

I have had problems for years with many of the coins certified and offered as “Proofs” from the first U.S. Mint. I think a better description for these unusual coins may be “presentation pieces.”

The 1836 set was unquestionably made in a special way for special distribution. The coins were all uniformly reflective and were well struck. It seemed that they were likely retained as a set since their minting. While examining the set, I was astonished when viewing the reverse of the Capped Bust half dime.

The half dime in the set was a LM-1.1 die marriage (Federal Half Dimes 1792-1837 by Russell Logan and John McCloskey) with the large retained cud over TED on the reverse. How could the Mint produce a “Proof” coin from a fractured die? This reverse die had been used to strike three die marriages in 1835 before being mated with an 1836 obverse die. It was a coin exhibiting all one would expect from a presentation strike with a terminal die state to boot.

Upon further research, I noticed that Breen noted in his book that “... Business strikes were made after the proofs, showing light to very heavy breaks in the mentioned area. …” OK, things were beginning to come together. I formulated an opinion that has not been altered over the last few years concerning these pieces.