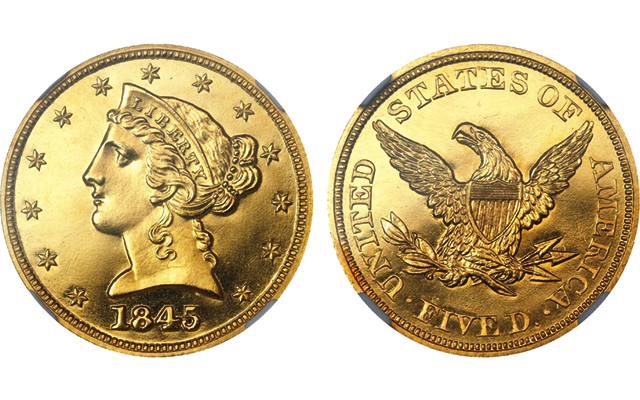 The sale was held in conjunction with the Long Beach Coin, Currency, Stamp & Sports Collectible Show.

One of the top highlights in the sale was an 1845 Coronet gold $5 half eagle, graded Numismatic Guaranty Corp.  Proof 64 Cameo.

The coin is cataloged as one of just three 1845 half eagles extant in Proof.

Another example is an NGC Proof 66 Cameo coin sold by Bonham’s in September 2013 for $292,500 from the Tacasyl Collection.

The third example is part of the National Numismatic Collection in the Smithsonian Institution’s Museum of American History. Numismatists and authors Jeff Garrett and Ron Guth consider its condition as Proof 65.

Among the other featured highlights: