One of a kind numismatist 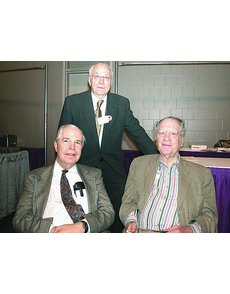 It is refreshing when someone is honored — and widely and extensively — when he or she is alive to read and receive the accolades.

Such is the case with my fine friend, Eric P. Newman, who on May 25 celebrated his centenary.

I don’t recall when I first interfaced with Eric, but it was sometime in the 1950s. I have always loved numismatic research, and a focal point was the enigmatic Machin’s Mills — a private mint on Orange Pond near Newburgh, N.Y.

Sylvester S. Crosby had printed some fascinating correspondence about the mint in his 1875 book, Early Coins of America.

Operations were conducted in secret, and a guard wore a hideous mask to frighten any curiosity seekers who happened by.

The place was actually a nest of counterfeiters who, without authority, made their own versions of the copper coins of Connecticut, New Jersey and a few other places.

In seeking to learn more, I found out that Eric Newman had studied the subject in depth, but still was following clues; that Walter Breen had his own set of theories; and Ken Bressett was another numismatist who enjoyed pursuing the mystery.

In 1957, several of us decided to form the Rittenhouse Society, a club devoted to writing and research in American numismatics. The organizers were Bressett, Breen, Dick Johnson (who in 1960 would become founding editor of Coin World), Grover C. Criswell Jr., Ken Rendell, George Fuld and me. After several meetings at coin shows, we had our first formal (sort of) annual breakfast meeting at the American Numismatic Association convention in Boston.

We set about formulating rules for membership. The “old guard” dealers in the rare coin business were not particularly interested in research, and at the time it was usual for years to pass between publication of new references in the American series. We would change things! Or at least try to.

In 1961, Eric became our first honorary member — as we all agreed he was our leader and inspiration.

Further about Eric, we talk and correspond often, and in years past we would often meet at conventions. He has helped me greatly in my research and, among many other things suggested the title for my book, A California Gold Rush History Featuring Treasure from the S.S. Central America, wrote the foreword for Obsolete Paper Money Issued by Banks in the United States 1782 to 1866, and has helped in so many other ways that I could never list them all. He is truly one of a kind.