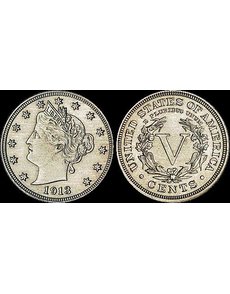 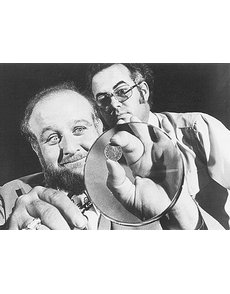 Television actor Victor Buono, in his role as European master criminal Eric Damien in the Dec. 11, 1973, episode of Hawaii Five-O titled “The $100,000 Nickel,” and an unidentified actor eye the Olsen specimen of the 1913 Liberty Head 5-cent coin. 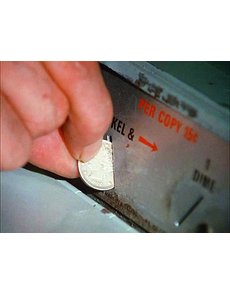 In this screen image captured from the episode of Hawaii Five-O, the thief of a stolen 1913 Liberty Head 5-cent coin sticks it (a stunt coin dated 1910, actually) into the coin slot of a newspaper vending machine as police close in on him.

Once appearing in an episode of the 1970s television drama Hawaii Five-O, the Fred Olsen example of the 1913 Liberty Head 5-cent coin will cross the auction block in January for the second time in four years.

The Olsen 1913 Liberty Head 5-cent coin was last offered Jan. 7, 2010, in Orlando, Fla., in conjunction with the Florida United Numismatists convention. The coin sold in that sale for $3,737,500. The coin is now part of The Greensboro Collection.

The coin is certified Proof 64 by Numismatic Guaranty Corp. and considered the second finest of five examples known.

The Olsen coin will make a return visit to the auction block at FUN during the Jan. 9, 2014, Platinum Night session at the Orange County Convention Center.

In the episode’s story line, according to the Internet Movie Database (www.imdb.com): “A rare 1913 Liberty Head nickel, one of only five ever made, is to be auctioned at a coin show held at the Ilikai Hotel. European master criminal Eric Damien [actor Victor Buono] gets con artist and sleight-of-hand expert, Arnie Price [actor Eugene Troobnick], freed from jail so that he can switch a cleverly-made fake with the original before the auction. But things do not go as planned, as Price, fearing capture, tries to dispose of the nickel in a news rack, and the chase is on to recover the nickel before anyone else finds it.”

The coin switch is detected before Price can exit the hotel. The thief deposited the coin in the coin slot of a newspaper vending machine, expecting to recover the coin later.

However, when Price returns to recover the coin, he discovers the paper boy who swaps out papers has just emptied the change. A scuffle ensues and the paperboy is killed. Price runs away without finding the coin. During the struggle, coins are scattered over the ground.

Shortly afterward, a young boy, unaware of the coin’s rarity, notices and picks up the stolen 1913 coin and subsequently spends it.

The coin is eventually returned to its rightful owner after passing through a number of hands.

During the filming of the episode, the genuine Olsen 1913 5-cent coin appeared on camera four times and was held only by Buono. A “stunt coin” was used for the remainder of the appearances in the show, including during the close-up scene of the coin being placed into the coin slot.

Collectors were unaware that any 1913 Liberty Head 5-cent coins existed until Samuel W. Brown, a former Mint Cabinet curator at the Philadelphia Mint, advertised in the December 1919 issue of The Numismatist that he wanted to purchase any existing examples for $500 each.

Some collectors have speculated that Brown had the coins struck during his Philadelphia Mint tenure and, after waiting a few years, placed advertisements in which he claimed to be seeking to purchase examples as a mean to legitimize their existence.

From Brown, the five coins have been traced as passing through the hands, circa 1924, of Philadelphia coin and stamp dealer August Wagner, Philadelphia dealer Stephen K. Nagy, and New York dealer Wayte Raymond. Raymond quickly placed all five coins with one of the most prominent collectors of the era — Col. Green. Green retained ownership of the five coins until his death in 1936.

Johnson, who operated the St. Louis Stamp & Coin Co., assisted numismatist Fred C.C. Boyd in appraising Col. Green’s estate and was responsible for dispersing it into the marketplace.

All five examples of the 1913 Liberty Head 5-cent coin remained together until 1943 when Newman chose to retain only the finest example; he sold it in 1948.

The example being sold in January traditionally bears the name of a former owner, Fred E. Olsen.

According to Heritage Auctions: “[Olsen] was born in England in 1891 and finished his technical training at the University of Toronto. He later lived in Alton, Ill., where he was employed as technical director at the Western Cartridge Company. ... Olsen died in 1986 at his home in Guilford, Conn.”

Fort Worth, Texas, dealer B. Max Mehl eventually brokered the sale of the coin in 1944 from Olsen to King Farouk I of Egypt, who owned the coin briefly.

Department store owner Edwin Hydeman purchased the Olsen specimen for $3,750 in 1961 and kept it until 1972 when World Wide Investments purchased it for $100,000. Jerry Buss, a collector and sports magnate who owned the Los Angeles Lakers basketball team, purchased the coin in 1978 for $200,000.

Collector Reed Hawn purchased it at public auction through Superior Galleries in 1985 for a hammer price of $350,000 plus 10 percent buyer’s fee.

Dwight Manley, distributor of the SS Central America treasure, acquired the coin for Spectrum Numismatics in Stack’s October 1993 sale of the Reed Hawn Collection for a hammer price of $875,000 plus the then 10 percent buyer’s fee.

The coin has been more recently owned by Bruce Morelan and Legend Numismatics, and then by John Albanese and Blanchard and Co. Inc. before its placement with The Greensboro Collection. ¦