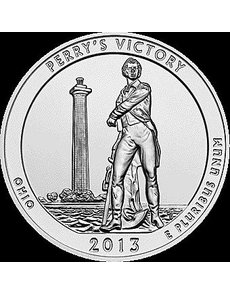 A statue of Commodore Oliver Hazard Perry, the “hero of Lake Erie,” with the Perry’s Victory and International Peace Memorial in the background, appears on the reverse of the 2013 America the Beautiful quarter dollar.

Ferry service schedules will play an important role in the April 20 launch ceremonies at Put-in-Bay, Ohio, for the 2013 Perry’s Victory and International Peace Memorial quarter dollar.

The community of Put-in-Bay is located on South Bass Island in Lake Erie.

In announcing preliminary details Feb. 6 for the ceremonies, Blanca Alvarez Stransky, superintendent of the National Park Service site, said the National Park Service is working with the two ferry service companies — Jet Express (www.jet-express.com/) and Miller Boat Line (www.millerferry.com/) — that will shuttle passengers and/or their vehicles to the ceremony site on South Bass Island. Stransky said the ceremony was scheduled at 11:30 a.m. Eastern Time to accommodate the ferry services’ schedules.

Jet Express carries passengers from Port Clinton, Ohio. Miller Boat Line transports both passengers and their vehicles from its location at the end of Catawba Island peninsula in Port Clinton. Both companies charge separate, one-way fees. Check the individual websites for details and directions.

The 11:30 a.m. ceremony, weather permitting, is being scheduled to be staged on the lower plaza of the memorial. The memorial was closed to permit restoration and an ongoing investigation of structural damage first discovered when a 500-pound piece of granite fell from the observation deck in June 2006.

Should weather be inclement, Stransky said, the coin launch ceremony will be moved indoors to the Niagara Event Center, 71 Concord Ave., in Put-in-Bay.

Ferry schedules will also play a role in the coin collectors forum to be held April 19 at the Perry’s Victory and International Peace Memorial Visitor Center, 93 Delaware Ave., in Put-in-Bay.

Stransky said Feb. 6 that the forum will likely be held sometime in the afternoon, since the ferries will not be running evening hours. An announcement will be made once a time for the forum is established, she said.

Stransky said a bank has not been selected yet whose personnel will handle the coin exchange after the April 20 launch ceremony, in which cash can be exchanged for $10 rolls of the new circulation-quality coins.

Perry’s Victory and International Peace Memorial was established to honor those who fought in the Battle of Lake Erie, during the War of 1812, and to celebrate the long-lasting peace between Britain, Canada and the United States. The memorial, a Doric column rising 352 feet over Lake Erie, is situated 5 miles from the longest undefended border in the world.

The memorial bears the name of Master Commandant Oliver Hazard Perry. Six naval officers (three American and three British) slain during the battle are buried under its rotunda. It was first established as a national site on March 3, 1919 (40 Stat. 1322).

The reverse of the quarter dollar depicts a statue of Perry with the Peace Memorial located in the distance. The design was created and sculptured by U.S. Mint Sculptor-Engraver Donald Everhart II.

The quarter dollar was scheduled to be released into general circulation through the Federal Reserve April 1, the same day the U.S. Mint will make circulation-quality examples of the coins in bags and rolls available to collectors at numismatic premiums above face value.

The coin is the second quarter dollar of 2013 and the 17th overall in the America the Beautiful Quarters Program. ¦