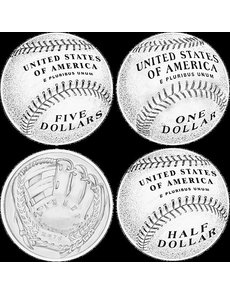 Clockwise, from above left, are the common convex reverse designs approved for the 2014 National Baseball Hall of Fame gold $5 coin, silver dollar and copper-nickel clad half dollar, and the finalist design endorsed by the Commission of Fine Arts and Citizens Coinage Advisory Committee for the common concave obverse design for all three coins. The final obverse selection is expected sometime in September.

The approved design for the common concave obverse for the 2014 National Baseball Hall of Fame gold $5 coin, silver dollar and copper-nickel clad half dollar is expected sometime in September.

The common convex reverse design, however, with which it will be paired, has been approved by Deputy Treasury Secretary Neal S. Wolin on behalf of Treasury Secretary Jacob J. Lew for the three commemorative coins. The design was unveiled July 26 in Cooperstown, N.Y. The unveiling, at the National Baseball Hall of Fame and Museum, was on the opening day of the three-day National Baseball Hall of Fame Induction Weekend.

The common design, created and sculptured by U.S. Mint Sculptor-Engraver Donald Everhart II, depicts a stitched baseball similar to that used by Major League Baseball. The design is the same for all three coins, except for the representation of the denomination on each.

The coins’ reverses will be convex to more resemble the curvature of a baseball.

Whatever design is selected from among the 16 finalist obverse designs will be emblematic of the game of baseball. The obverse design is to be struck concave for each of the three commemorative coins.

One finalist, an obverse design by artist Cassie McFarland featuring a baseball glove, has been endorsed by both the Commission of Fine Arts and Citizens Coinage Advisory Committee.

Lew or his designee can concur with the CFA and CCAC recommendations or opt for one of the other finalist obverse designs.

The creator of the winning obverse design will receive compensation of not less than $5,000, according to the authorizing legislation, and will have designer’s initials appear on each of the three coins along with the member of the U.S. Mint’s engraving staff designated to sculpture the design.

U.S. Mint officials say Everhart sculptured the model for his own design, with the text for the denomination and other inscriptions added digitally.

The National Baseball Hall of Fame Commemorative Coin Act (Public Law 112-152) authorizes the United States Mint to strike and issue up to 50,000 gold $5 coins, 400,000 silver dollars and 750,000 half dollars combined in Proof and Uncirculated versions in recognition of the National Baseball Hall of Fame, which celebrates its 75th anniversary in 2014.

Surcharges collected from coin sales — $35 for each gold coin, $10 for each silver dollar, and $5 for each half dollar — are authorized to be paid to the National Baseball Hall of Fame to help finance its operations once the U.S. Mint recoups its production costs.

The United States Mint will release the coins in early 2014. ¦