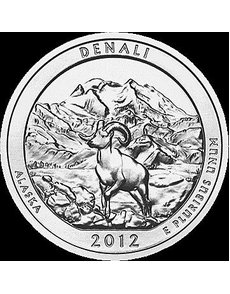 U.S. Mint and Denali National Park officials are considering Nov. 15 as the date and Healy, Alaska, as the location for official launch ceremonies for the circulating quarter dollar honoring the park.

The quarter dollar is being released into circulation through the Federal Reserve Banks on Nov. 5.

Kris Fister, public affairs officer at Denali, said officials are seeking a location that will be able to accommodate up to 500 people for the launch ceremony. That need likely will involve a facility in Healy, the borough seat for Denali Borough, Fister said.

Fister said Healy has limited venues that can accommodate up to 500 people. Healy is under consideration to host the quarter dollar launch ceremonies because most of the park, including the main visitors center, is shut down and inaccessible in November due to weather conditions, Fister said. The backup visitors center does not have enough physical space to handle the event, she said.

The venue being considered is the Tri-Valley Community Center, which also contains a branch of First National Bank Alaska, the only bank in Healy, Fister said. Discussions are being held with bank officials for the financial institution to sponsor and oversee the exchange of $10 rolls of 2012-D Denali National Park quarter dollars following the official ceremonies, Fister said.

The community center is being considered because the only other venue large enough to accommodate 500 people, the gymnasium of Tri-Valley School, is having its floor repaired because of water damage, Fister said.

The Tri-Valley Community Library is being considered as the host venue for a coin forum staged the evening of Nov. 14 by U.S. Mint officials. The Mint will outline the bureau’s initiatives and field questions from participants.

The quarter dollars are issued in the order in which the site being honored was congressionally recognized.

The design features a Dall sheep with Mount McKinley rising in the background.

The Mint followed the advice of both the Commission of Fine Arts and the Citizens Coinage Advisory Committee, offered during the two panels’ October 2010 meetings, of making the sheep larger on the coin than it appeared in the original rendition provided to the two groups for their review. ¦