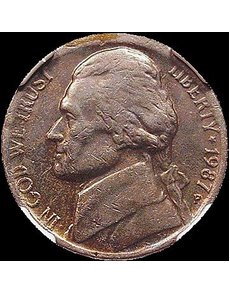 This 1987-P Jefferson 5-cent coin was struck on a planchet derived from quarter dollar stock. The planchet strip was fed into a blanking press intended for planchets for the 5-cent coin. 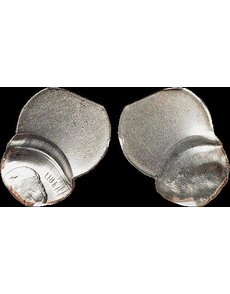 This off-center Jefferson 5-cent coin was struck on a planchet apparently punched out of copper-nickel clad stock intended for quarter dollars. 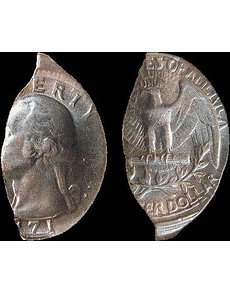 This 1971-D quarter dollar was struck off-center on a straight-clipped blank punched out of silver-copper clad half dollar or half balboa stock rolled to quarter dollar thickness.

A wrong stock error emerges when a strip (coil) of coin metal intended for one denomination is sent through a blanking press punching out blanks for a different denomination. The resulting blanks are eventually struck with the design and denomination appropriate to the diameter of the blank. A quarter dollar struck on a planchet punched from dime stock would be one example (Collectors’ Clearinghouse, Feb. 20, 2012).

The vast majority of wrong stock errors involve a blank with a metallic composition no different from the denomination it eventually carries. For example, after 1964, a dime, a quarter dollar and a quarter dollar struck on dime stock all have a copper-nickel clad composition. Only a few off-metal, wrong stock errors have been identified. This makes intuitive sense, because it’s easy to mix up coils that are identical in every respect except thickness. But a coil whose surface or edge color deviates markedly from the normal coil will usually be detected.

Our next Jefferson 5-cent coin carries no date and was struck off-center on a copper-nickel clad planchet, the unstruck portion of which terminates in a straight clip. The copper core is visible on both the planchet’s unstruck edge and along the outer margin of the struck tongue where it has extruded past the surrounding clad layers. Although its weight, diameter, and thickness have not been recorded, Jon Sullivan reports that its diameter seems to match that of a 5-cent planchet and its thickness seems consistent with quarter dollar stock. I suspect the blank that became this coin was derived from the leading edge of the same strip that gave rise to the 1987-P Jefferson 5-cent coins.

A number of other coins (many from the 1990s, and mostly 5-cent coins) are struck on anomalous clad or purported clad planchets. However, their size, weight and general appearance do not match the expectations for stock belonging to any known clad denomination (Collectors’ Clearinghouse, Feb. 13, 2012).

The last off-metal, wrong stock error is the most complex. Recently brought to light by Fred Weinberg, it’s a 1971-D Washington quarter dollar struck off-center on a quarter dollar-sized, straight-clipped blank that weighs 2.4 grams. Numismatic Guaranty Corp. lists its composition as 80 percent silver and 20 percent copper. This metal ratio is found in the clad layers of half dollars struck between 1965 and 1970 and in physically identical half balboa coins struck on behalf of Panama by the San Francisco Assay Office between 1967 and 1972. As expected, darker core material is asymmetrically exposed along the edge of the coin’s unstruck upper corner. The grayish core presumably shares the 79 percent copper and 21 percent silver ratio found in the similarly gray cores of silver-clad half dollars.

One of those blanks made it as far as a quarter dollar press. The straight clip indicates that the blank is probably derived from the leading edge of the strip.

The scenario I’ve presented is not as unlikely as you’d think. Since 1965, the Denver Mint facility has been the primary source for wrong stock errors, along with generic rolled-thin and rolled-thick errors.