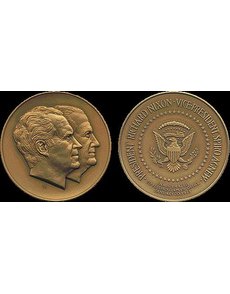 This bronze 1973 U.S. Presidential inaugural medal for President Richard M. Nixon and his vice president, Spiro T. Agnew, is among the more than 100,000 such medals struck. Both men would resign from office by 1974.

Forty years ago the Franklin Mint struck one of the most historic, strangest and oddly least valuable of all U.S. presidential inaugural medals — the 1973 Richard M. Nixon second inauguration medal.

Never before had America experienced a pair like Nixon and his vice president, Spiro T. Agnew. The disreputable duo appears on the obverse of the medal, which is notable for several reasons.

Nixon was sworn into office for a second term on Jan. 20, 1973. In his second inaugural address he said, “Let us pledge together to make these next four years the best four years in America’s history, so that on its 200th birthday America will be as young and as vital as when it began, and as bright a beacon of hope for all the world.”

The enthusiasm would not last long. On Oct. 10, 1973, Agnew resigned just before he was convicted of felony tax evasion charges stemming from a highway construction kickback scheme.

Two days later Nixon appointed Gerald R. Ford to serve out Agnew’s term as vice president. In less than a year, Ford would be sworn-in as U.S. president following Nixon’s resignation on Aug. 9, 1974.

Nixon’s inauguration committee had awarded the medal contract to Franklin Mint, a private mint. Gilroy Roberts, former chief engraver of the United States Mint, oversaw the firm’s artistic side. Roberts engraved the obverse of the Nixon medal himself.

Ironically, as chief engraver he had designed the obverse of the Kennedy half dollar, honoring Nixon’s nemesis in the 1960 election.

From the firm’s creation in 1964 through the early 1980s, Franklin Mint’s marketing materials appeared in major magazines, daily newspapers and as direct mail pieces.

The Franklin Mint produced two gold inauguration medals for presentation to Nixon and Agnew, and 23,162 silver and 106,036 bronze medals.

The silver medals contained nearly 6 ounces of silver and initially sold for $80 to $85, depending on finish. Today silver medals selling on eBay command a small premium over bullion.

Bronze medals, which were issued at $6 to $10 depending on finish, have a hard time finding buyers at any price. At any given moment dozens are listed on eBay. Some sell for $5 to $10. Many attract no bids at all.