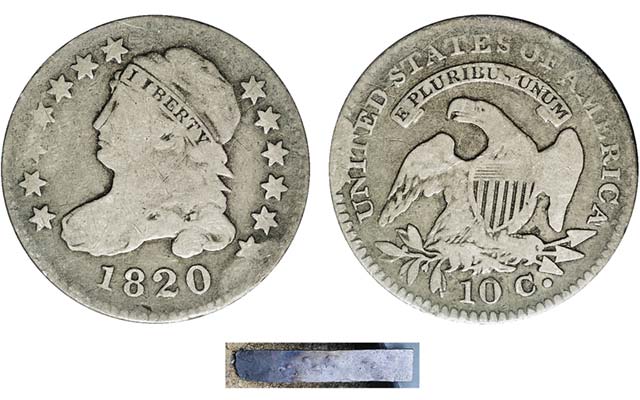 1820 Capped Bust dime exhibits bulging at Star 13. Weakness at Stars 3 and 4 is due to a cud on the reverse. “Blisters” on a steel bar illustrate what blister steel looks like.

In August of 2010 I wrote a column talking about the bulges collectors find on Bust coins, especially dimes from the years of 1814 and 1820. When one of the bulges appears near the edge of a well-worn coin it is often mistaken as a cud by beginning collectors.

Many collectors have asked me the cause of these abnormalities. It all comes down to one thing — steel. The steel used at this time to produce the dies was called “blister steel.” The process of production is listed on Wikipedia as follows:

“The process begins with wrought iron and charcoal. It uses one or more long stone pots inside a furnace. Iron bars and charcoal are packed in alternating layers, with a top layer of charcoal and then refractory matter to make the pot or ‘coffin’ airtight. Some manufacturers used a mix of powdered charcoal, soot and mineral salts, called cement powder.

“Depending on the thickness of the iron bars, the pots were then heated from below for a week or more. Bars were regularly examined and when the correct condition was reached the heat was withdrawn and the pots were left until cool — usually around fourteen days. The iron had ‘gained’ a little over 1% in mass from the carbon in the charcoal, and had become heterogeneous bars of blister steel.”

If you look at the accompanying illustration you will see the namesake “blisters” on the surface of the bar. The steel bars resulting from this manufacture were not always homogeneous. Sometimes there were weaker areas in the center of the bars resulting from the incomplete diffusion of the carbon into the iron. This weaker metal, when found in the structure of a die, would become compacted from the force of the screw press striking the coins. This created a shallow area on the dies’ surface and a resulting mound on the coin.

This mound, being higher than the protecting rim of the coin, would wear abnormally creating the illusion of a cud. As you can see, each piece of steel would have its own problems. The weak area of the rod was near the center and would go unnoticed by the die maker until the sinking die face would indicate the problem.

Dies were in the shape of a cylinder on a cylinder so the striking area of the die was the center of a larger rod. This means the weakest area of the die steel was the part that was being used to produce the coins. The finished die was a very valuable item and could not be discarded if it was still usable.