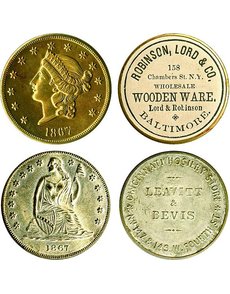 It is always enjoyable to find something new to study. Over a long period of time I have immersed myself in the numismatic, technical and historical aspects of many different series — from Colonial and early American coins to pioneer gold to patterns to all sorts of federal series to American paper money.

It is always fascinating to delve into new territory — the more obscure the better!

Quite a few years ago, I developed an interest in shell cards — these being tokens or store cards issued by merchants in the late 1860s and the 1870s.

More than 800 varieties were described by Ralph Mitchell and Russell Rulau in a series of studies published beginning in 1961 in the TAMS Journal, the official journal of the Token and Medal Society.

Since then, little has been published other than scattered mentions.

Shell cards are made of one or two shells, joined together and bearing a cardboard insert for added strength and support. Shells cards appear in multiple forms.

Some bear an embossed design on one of the metal shells. Among these are close copies of Seated Liberty silver dollars dated 1867, 1868 and 1869. Double-eagle motif cards are dated 1867 to 1870.

Another form bears a looking-glass or mirror insert in the metal shell, and there are other motifs I could mention. The reverse, either printed on cardboard or embossed in metal on a second shell, bears an advertisement for goods or services — wine, dentistry, steamship passage, patent medicine, clothing, circus acts, you name it. The diversity is wonderful.

By checking through old catalogs and magazines from the 1870s to date, by corresponding with enthusiasts and experts (such as David Schenkman and the late Steve Tanenbaum), and studying the shell cards themselves, I hope to create an illustrated reference work on them. This will take a year or two to complete. It will, as you can imagine, be a nonprofit project. Shell cards are hardly in the mainstream of interest.

You can get a credit line in the book if you have one of these, 1867 to 1876, and approximately gold $20 double eagle to silver dollar size. Send me a sharp resolution image (400 dpi or more) of each side, by email, and I’ll respond. I’ll tell you whether your card is common (that is, say a dozen or more are known) or scarce (as most are) or, better yet, completely new to me.