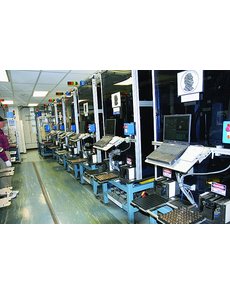 Trays of each of the four Proof 2012-S Presidential dollars are positioned to be inserted into the automated assembly line where the coins will be robotically transferred from the coin trays into their proper slots in the one-piece plastic inserts that will eventually be placed into hard plastic lenses. Each tray contains designs of a single type. 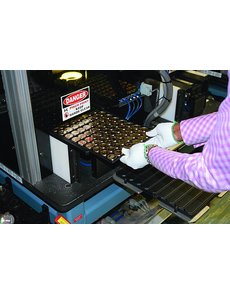 When one tray’s complement of coins is exhausted, another tray filled with coins of the same design is positioned to take the place of the empty tray. 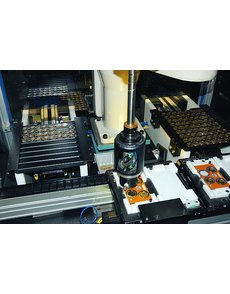 After picking the coin up from one of the coin trays, a robotic arm places a Proof Presidential dollar into its proper position in the coin set. 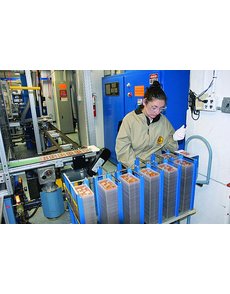 After the sets have been encapsulated in hard-plastic lenses, the sets are visually matched against a chart for proper coin orientation and checked for defects. 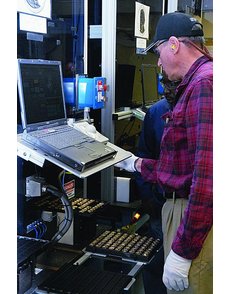 Here, an orientation and coin placement station is checked on a computer monitor to make sure the first-term Grover Cleveland dollar is being robotically placed in its proper location and alignment in the four-coin Presidential Proof set. 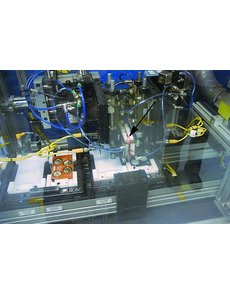 The two halves of the hard-plastic lens, one containing the coins, bottom left, will move along the assembly conveyor and be brought together and friction fit (shown by arrow). 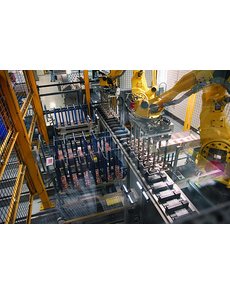 Robots evenly space the encapsulated coins along a conveyor that will take the lensed coins into a station where robotic tooling takes flat packaging boxes identifying the contents, opens them, inserts the set, seals the flaps where needed with adhesive and closes the top flap before the sets exit the other side. 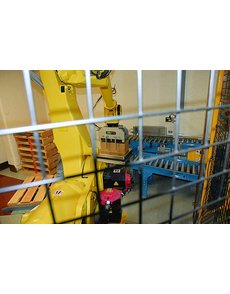