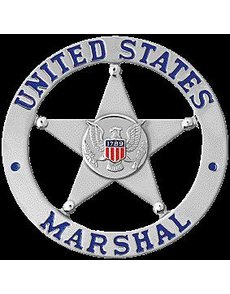 Under provisions of the United States Marshals Service 225th Anniversary Commemorative Coin Act, now law, the obverses of both the half eagle and silver dollar will be mandated to depict renderings of the U.S. Marshals star as taken from the Marshals badge.

The bill was presented to President Obama March 23.

The three-coin program for 2015 commemorates the 2014 anniversary of the U.S. Marshals Service.

The Senate amendment addressed whether the coins would be produced at a cost to American taxpayers.

After several months of negotiations, Sen. Tom Coburn, D-Okla., lifted his objection to the proposed U.S. Marshals coins legislation after an amendment was added to H.R. 886 guaranteeing the U.S. Mint will recover all of its production costs before any surcharges from coin sales are distributed to recipient entities.

H.R. 886, as originally introduced by Womack, passed the House on Dec. 15, and was referred two days later to the Senate Committee on Banking, Housing, and Urban Affairs.

The House took up the amendment March 21 under a suspension of the rules and agreed to the change in the bill by a vote of 409-2, with two members voting “present” and 18 members not voting.

Although the amended H.R. 886 calls for a 2015 coin program, the bureau’s anniversary is actually in 2014 and only one commemorative coin bill has been approved for 2014. Congress is legislatively limited to two commemorative coin programs per calendar year according to Mint reform legislation approved in 1996. Currently, 2014 will bring silver dollars marking the 50th anniversary of the passage of the Civil Rights Act of 1964.

Legislation calling for commemorative coins honoring the U.S. Marshals 225th anniversary was introduced in the House and Senate by Arkansas legislators in 2009 and 2010. Those bills called strictly for gold $5 half eagles and silver dollars, while the newly signed law calls for a three-coin program through the inclusion of a copper-nickel clad half dollar.

Under the law, the first $5 million in surcharges from coin sales, after the U.S. Mint has recovered its production costs, will be distributed toward the planned construction of the U.S. Marshals Museum in Fort Smith, Ark., for the public display of artifacts and preservation of the agency’s history.

United States marshals were established under the Judiciary act of Sept. 24, 1789, during the first session of the first Congress, and signed into law by the first president, George Washington.

In 1969, by order of the Department of Justice, the U.S. Marshals Service was created, which achieved bureau status in 1974.

Provisions of the United States Marshals Service 225th Anniversary Commemorative Coin Act mandate the production and issuance of up to 100,000 gold $5 half eagles, 500,000 silver dollars and 750,000 copper-nickel clad half dollars combined in Proof and Uncirculated versions.

Each gold coin will have a $35 surcharge included in the purchase price, while each silver dollar will have a surcharge of $10 and each half dollar, a $3 surcharge.

Any surcharges collected above the initial $5 million — after the Mint has recovered all of its production costs — will be split evenly between the Federal Law Enforcement Officers Association Foundation, the National Law Enforcement Museum, and the National Center for Missing and Exploited Children, according to the House bill.

The obverse of the half eagle is to carry the U.S. Marshals Service Star.

The half eagle’s reverse is to carry a design emblematic of the sacrifice and service of the men and women of the U.S. Marshals Service who lost their lives in the line of duty and include the service’s motto, “Justice, Integrity, Service.”

For the dollar, the obverse is again to depict “America’s Star” while the reverse will have a design “emblematic of the United States Marshals legendary status in America’s cultural landscape. The image should depict Marshals as the lawmen of our frontiers, including their geographic, political, or cultural history, and shall include the Marshals Service motto ‘Justice, Integrity, Service.’ ”

The half dollar’s obverse will differ from the designs on the silver dollar and half eagle in that it is to bear a design emblematic of the U.S. Marshals Service and its history.

The reverse of the half dollar is to have an image consistent with the role that the group has played in the nation’s history, with the legislation specifying: “The image should show the ties that the Marshals have to the United States Constitution, with themes including — (I) the Whiskey Rebellion and rule of law; (II) slavery and the legacy of inequality; and (III) the struggle between labor and capital.”

The law calls for the designs to be selected on the basis of realism and historical accuracy, adding, “and on the extent to which the images are reminiscent of the dramatic and beautiful artwork on coins of the so-called ‘Golden Age of Coinage’ in the United States, at the beginning of the 20th Century, with the participation of such noted sculptors and medallic artists as James Earle Fraser, Augustus Saint-Gaudens, Victor David Brenner, Adolph A. Weinman, Charles E. Barber, and George T. Morgan.” ¦