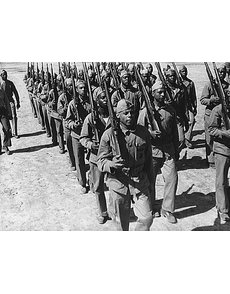 An act to grant a congressional gold medal collectively to the Montford Point Marines was signed into law by President Barack Obama Nov. 23.

The bill, H.R. 2447, was introduced in the House of Representatives by Rep. Corrine Brown, D-Fla., on July 7. It passed the House on a vote of 422-0 on Oct. 25, and passed the Senate without amendment by unanimous consent Nov. 9. The measure was presented to President Obama for his signature Nov. 15.

The findings section of the bill relates the history of the Montford Point Marines in the framework of President Franklin D. Roosevelt’s Executive Order No. 8802 — signed June 25, 1941 — which established the Fair Employment Practices Commission and opened the doors to the first African-Americans to enlist in the United States Marine Corps.

The first black Marine recruits were trained at Camp Montford Point, near the New River in Jacksonville, N.C. On Aug. 26, 1942, Howard P. Perry of Charlotte, N.C., was the first black private to set foot on Montford Point. Overall, 19,168 blacks served in the Marine Corps during World War II including some 2,000 black Marines who saw combat during the seizure of Okinawa in the Ryuku Islands.

Rep. Brown said in a Nov. 10 statement: “Indeed, this Resolution recognizes the service and sacrifice of the Montford Point Marines, and clearly demonstrates that today’s United States Marine Corps is an excellent opportunity for advancement for persons of all races. Clearly, the original Montford Point Marines serve as a prime example of this, and set the bar very high for future Marines.”

Sen. Hagan issued a Nov. 9 press release where she stated: “These men, who were based out of North Carolina in WWII, served our country with courage and dedication, even in the face of discrimination and intolerance. There is no better way to celebrate the Marine Corps’ birthday and Veterans Day than by honoring these men for their service and sacrifice and granting them the recognition that is 50 years overdue.”

On Sept. 20, Rep. Joe Baca, D-Calif., introduced H.R. 2970, a bill that would award a congressional gold medal in recognition of Alice Paul’s role in the women’s suffrage movement and in advancing equal rights for women.

The findings section of the bill states, “Alice Paul dedicated her life to securing suffrage and equal rights for all women and, as the founder of the National Woman’s Party, she was instrumental in the passage of the 19th Amendment to the United States Constitution.” That amendment granted women the right to vote. In 1923, Paul would draft the Equal Rights Amendment and fought for its passage until her death in 1977.

Rep. Baca had introduced a similar bill in 2009 that attracted 139 cosponsors, but never made it out of the House Committee on Financial Services. Similar unsuccessful legislation for a gold medal honoring Alice Paul was also introduced in the House and Senate in 2007 during the 110th Congress and also in the 109th Congress.

On Sept. 21, Sen. Kirsten E. Gillbrand, D-N.Y., introduced S. 1591, which would authorize a congressional gold medal for Raoul Wallenberg in recognition of his achievements and heroic actions during the Holocaust. Wallenberg, acting under the War Refugee Board, is credited with saving an estimated 100,000 of the 120,000 Jews in Hungary that survived World War II. The bill states, “Indeed, many American Jews can directly or indirectly attribute their own lives to Raoul Wallenberg’s actions during World War II.”

That same day in the House, Rep. Gregory W. Meeks, D-N.Y., introduced H.R. 3001, a companion bill titled “Raoul Wallenberg Centennial Celebration Act.” In a Sept. 21 press release, Rep. Meeks states, “The heroic rescue of Hungarian Jews by Raoul Wallenberg during one of the darkest hours of human history exemplifies his outstanding spirit and dedication to humanity.” ¦