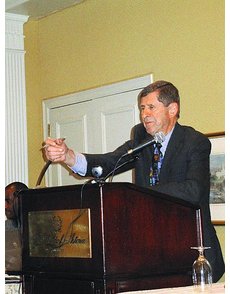 Auctioneer Herb Kreindler calls lots during the Gemini Numismatic Auctions’ Jan. 9 auction in the Norse Suite on the 18th floor of the Waldorf-Astoria Hotel. 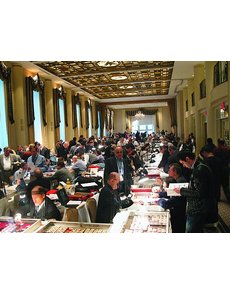 One view captures much of the length of the bourse floor in the Starlight Roof room on the 18th floor of the Waldorf-Astoria Hotel.

The convention, held at the historic Waldorf-Astoria Hotel in New York City, featured nine days of auctions that topped $41 million in prices realized, eclipsing the $34 million total of 2010.

How popular were the auctions?

More than anecdotal evidence suggests interest was high: Ponterio’s marathon sessions of auctions stretched until 2 a.m. both nights of its Jan. 7 and 8 sale.

Bidders spilled out of a sardine-can-tight bidding room at the 3:20 p.m. start of Gemini Numismatic Auctions’ Jan. 9 auction, and though the show had ended at that point, one full day of sales still remained on the schedule.

Snowy weather in suburban New York Jan. 8 may have kept the bourse relatively lighter than in the past, but still crowded for a Saturday.

The number of professional preview attendees — those willing to pay $100 to start buying and selling before the show opened to the public on Friday, Jan. 7, at 10 a.m. — was 170 people. That is down slightly from 2010, when it numbered 179.

Dmitry Markov, a principle in the New York Sale consortium, saw three segments of strength at the show. “The three hottest markets for foreign coins are Indian, Chinese and Russian,” he said.

Collectors following the Chinese market required a capable calculator to quantify the price explosion on some pieces.

On the high end of the market, an undated (struck 1897) Imperial Dragon type silver half dollar (3 mace and 6 candareens) of Jiangnán Province, struck at the Heaton Mint, realized a hammer price of $180,000. The coin, graded Proof 67 by Numismatic Guaranty Corp., had a $50,000 pre-auction estimate.

In what might once have been called the lower (or more affordable) end of the Chinese market, a Regnal Year 24 (1898) silver yuan dollar, of the Imperial Dragon type, struck at the Fengtian Mint for Fengtian Province, realized $70,000 against an estimate of $1,000.

While many examples are more moderate — realizations of only 20 and 30 times estimate — it is clear that what was once affordable to many collectors is no longer so.

It was not just the CNG auction: a similar example residing in the Ponterio auction also exceeded expectations. A Year 33 (1907) silver dollar, struck at the Pei Yang Arsenal for Chihli Province, graded NGC Mint State 63, realized $32,450, against a $1,200 to $1,500 estimate.

Other segments experienced similar, if not so astounding, results.

As Markov noted, the heated market for Russian coins was reflected in the auctions.

However, even Markov was surprised with the results that small Russian gold coins were bringing, noting that usually collectors have no problem paying high prices for large Russian rarities, but in the past have balked at paying similar prices for their smaller brethren.

Not so this year.

A 1703 gold ducat of Peter I, weighing 3.3 grams, was graded Extremely Fine 40 by NGC. With a pre-auction estimate of $75,000, it realized $230,000. “I can’t think of any other country where small-size gold would bring that much,” he said. “This just shows the craziness and strength of the market in general.”

A highlight from the CNG Triton XIV auction was a circa 357 to 356 B.C. silver tetradrachm struck for Amphipholis, in Greece. The coin was graded Good Very Fine. It realized a hammer price of $700,000 versus a pre-auction estimate of $200,000.

Another example of coins blowing past their estimates was in Freeman & Sear’s Jan. 4 sale.

The ancient coins of Syracuse, Greece, are classics, and a circa 400 to 395 B.C. silver decadrachm, struck from unsigned dies in the type of the famed Euianetos, realized a $260,000 hammer price. The coin, toned and graded EF, had a $150,000 pre-sale estimate.

Other segments of the market also fared well on the bourse, dealers told Coin World.

Christopher Eimer, medals expert and author, noted a strong reception for the second edition of British Commemorative Medals and Their Values, which was published in late 2010. Eimer sold out all of the copies he had and Charles Davis, who sells books for Spink in the United States, nearly cleared his table of the Eimer book as well. Eimer said that both interest in and the market for medals have increased steadily in recent years.

Coins of many countries are becoming cost-prohibitive, he said, so “people are looking at medals.” A collector can buy a medal from the 17th century of superb quality bearing the same portrait that appears on the coinage that is now out of their price range, for less money.

This growth in the market for medals “holds across whichever country you choose to name,” Eimer said.

The table where Allen Berman could be found was busy throughout the show.

Berman said he was able to buy “quite a bit of Chinese coins on a hobbyist level price,” with ancient coins available “across the board.”

Selling was constant, though, and Berman saw an economic factor at work. “People are beginning to see that the dollar may be declining.”

Coin collecting, compared to other hobbies and entertainment like going to the movies or water skiing, where “there’s nothing left at the end,” at least leaves collectors with something after they’ve spent their money.

“It makes it easier to rationalize spending on a hobby like this,” Berman said. ¦