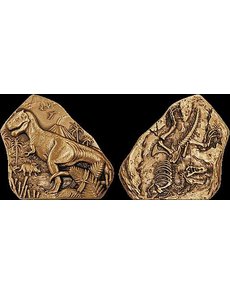 Jeff Shevlin, former executive director of the American Numismatic Association, has been named director of special projects for the Northwest Territorial Mint (NWT). He will work from their Dayton, Nev., facility.

He headed the ANA for less than a year, serving as the organization’s executive director from May 2012 through April of this year when he was relieved of his duties by the ANA Board.

According to NWT officials, in his new assignment Shevlin will oversee projects related to branding the mint’s art medals, digitizing assets, and will support and implement publishing and web objectives.

During the combined 110-year history of the three entities, NWT has produced some of America’s most important minted items, including the Peabody Award, the Pulitzer Prize, and the Medal of Honor.

Ross Hansen, NWT’s founder and CEO, said, “We are elated to have Jeff join our team. He is a nationally recognized numismatist who brings strong technical skill and leadership talent to our organization.”

Shevlin said he’ll be responsible for, among other projects, creating digital archives of all Northwest Territorial Mint and Medallic Art Company (MACO) medals ever struck and making them available online.

Shevlin said he also will be expanding the firm’s presence and outreach on the Internet.

Also, Shevlin said he will oversee researching and publishing a history of Medallic Art Company, which was founded in 1903, as well as many other collector/technology-related projects.

“Basically I will grow the awareness of NWT and MACO and the quality and history of their products so that people and organizations that want to strike quality medals think of us first,” Shevlin said.

In addition to having offices in Nevada, Washington and Texas, the company also has facilities in Green Bay, Wis.; Alexandria, Va.; and at the Pentagon.

Shevlin can be reached directly by email at Jeff.Shevlin@NWTMint.com, or by telephone at 775-461-6006.

For more information about Northwest Territorial Mint and its products, visit the firm’s website at www.NWTMint.com/.