Numismatics offers much that other collecting fields lack 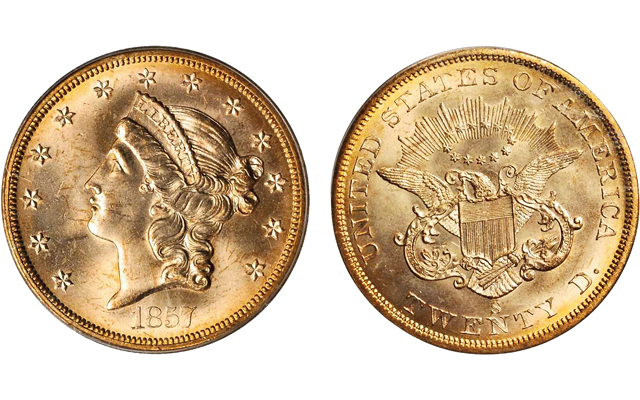 Gold coins are a vital part of the hobby. Shown is a Mint State 1857-S Coronet $20 double eagle from the SS Central America treasure. More than 5,000 were recovered from the 1857 shipwreck. 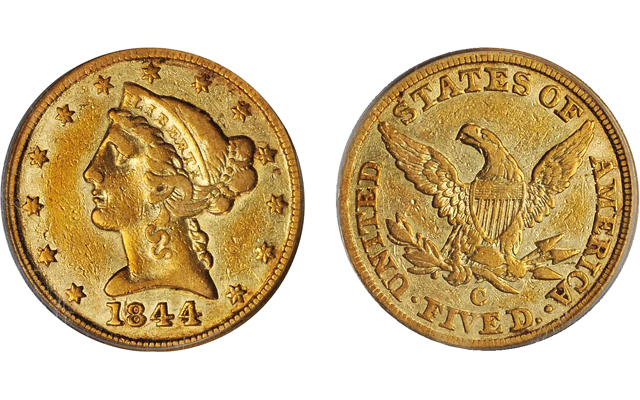 Gold was responsible for the establishment of six of the eight U.S. Mint production facilities, including the Charlotte Mint where this 1844-C Classic Head $5 half eagle was struck.

The success of the rare coin hobby (or industry if you like to call it that) is marvelous. We can all be happy and proud that it is so strong.

I can contemplate a number of assets that have been and are central to this. There is Coin World, of course, and other periodicals.

Certified grading services are high on the list as well, as they build confidence. Ditto for specialized societies, whose members tend to stay with numismatics for a long time.

A nod must go to auction houses and rare coin dealerships for making coins available and disseminating information. And, what would we do without the Internet?

David Hall’s invention of Registry Sets at Professional Coin Grading Service has probably added hundreds of millions of dollars to the cumulative worth of coins in various collections and inventories, never mind that only a teensy weensy percentage of collectors are thus involved (4,000 or so, I think).

Lure of gold and silver

The same goes for the lore and lure of gold and silver, sunken treasures, and other hoards (the Treasury release of 1962 comes to mind).

Most of these factors are not present in such fields as collecting art, books, antiques, prints, automobiles, manuscripts, or dozens of others.

Whitman Publishing LLC, for which I am the numismatic director (one of the many pleasures of my life), is another foundation stone. You may be surprised to learn that most Whitman numismatic books are sold nationwide to noncollectors.

As such, a more powerful influence to draw people to the world’s greatest hobby (opinion here) cannot be imagined!

A Guide Book of United States Coins is one of the top 10 best-selling nonfiction books of all time. Everyone benefits!

I have just read the first chapter of a book Dennis Tucker, who holds down the office of publisher at Whitman, is doing, American Gold and Silver: U.S. Mint Collector and Investor Coins and Medals, Bicentennial to Date. The book should be in bookstores this autumn.

I could probably get up on a proverbial soapbox and give a half-hour speech on the 1907 Saint-Gaudens, Roman Numerals $20 double eagle, the 1848 Coronet, CAL. $2.50 quarter eagle, an 1857-S Coronet double eagle from the SS Central America treasure, or an octagonal $50 “slug” by Augustus Humbert, and I wrote a book on the 1822 Capped Head $5 half eagle.

At the same time, if you asked me to discourse on American gold bullion and commemorative coins from 1986 to date I would not be at a loss to do that, either.

I would have a few inside stories, anecdotes, or anything else that is not generally known.

As I look through Dennis’ other chapters when they are sent to me and other Whitman proofreaders I know I will learn a lot.

Starting next week my column will be about gold — not modern issues, but coins dating back to Colonial times onward, continuing into the 20th century to 1933, when the last such coins were made for general circulation.