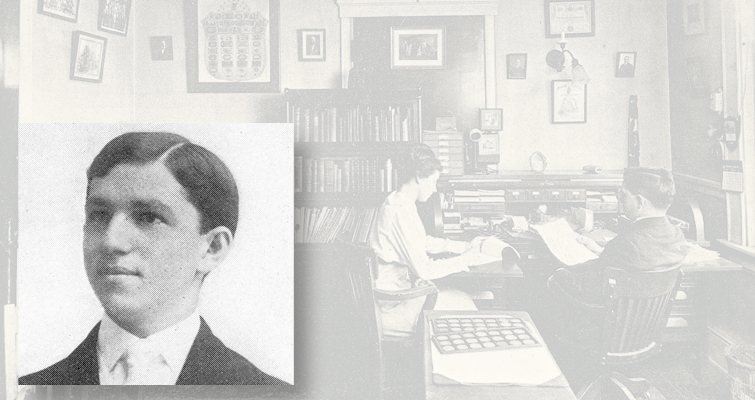 B. Max Mehl, left, circa 1908-1909, and background in his Fort Worth, Texas, office several years later, was born in 1884 and started in business in 1900. He went on to become America’s leading rare coin dealer in the first half of the 20th century.

The Joys of Collecting column from March 21, 2016, Weekly issue of Coin World:

When Augustus B. Sage founded the American Numismatic Society in 1858, he was all of 16 years of age. By age 17, Sage wrote coin columns for a New York City newspaper and issued medals.

This prompts me to think about today. If you check the biographies of leaders among professional numismatists you will find that most of them began at a young age. Ken Goldman started collecting at age 7 and ordered his first Proof sets from the Mint at age 9. John Kraljevich discovered the world’s greatest hobby at the age of 10. I was a late bloomer at age 13. A list of other teens who became dealers when teenagers or not far removed would include (but hardly be limited to) these in business today:

There are so many dealers nationwide that I don’t know personally, and I imagine this list could be multiplied many times if all were included. Just listing these made me stop and think: today in 2016, are swarms of teenagers becoming coin dealers?

Time was when young Turks, as some called them, would spread out all over the bourse floor at shows and pick up bargains. The dynamics of teenagers might be worth emphasizing today more than we do, with a nod to the Young Numismatists group of the American Numismatic Association.

Yes, this series of columns is about the American Numismatic Society, but if you are a constant reader of my column, you know I like to take side trips.