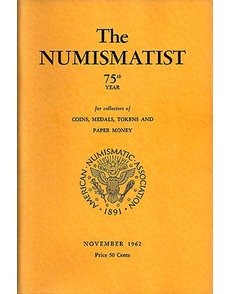 Advertisements in the November 1962 issue of The Numismatist are “pure delight,” according to the author. 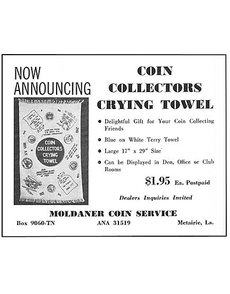 Above is an example of products advertised in that 1962 issue of the American Numismatic Association journal.

Many reasons exist to collect complete runs of coin magazines, like The Numismatist or The Numismatic Scrapbook Magazine.

Most important is access to their informative articles, some of which are still current, while others have been rendered obsolete by new information, but either way, they record what people knew about coins, and when they knew it.

Another great reason to collect old periodicals is that each individual issue is a delightful time capsule. The ads, the pictures and the writing style transport you to another time. Mostly, that trip is wonderful; some of it will make you cringe; but all of it is guaranteed to fascinate!

Let’s look, for example, at an issue of The Numismatist from more than 50 years ago: November of 1962. This issue reported on the highly successful joint convention of the American and Canadian Numismatic Associations, held in Detroit, Aug. 15 to 18, 1962.

Nineteen well-illustrated pages reported on the convention, including news that the British firm of Spink and Son had discovered, and was offering, the “King of Siam” Proof set, which included a fabled 1804 silver dollar. This revelation knocked the props from under the arguments made in the forthcoming book by Eric P. Newman and Ken Bressett, The Fantastic 1804 Dollar, and caused Bressett to literally run to a telephone and shout to their publishers at Whitman: “Hold the presses!” David Spink’s and James Risk’s article, “New Facts About an Old American Coin,” still makes for rapt reading, but interestingly, they do not reveal the source from which Spink purchased the King of Siam set.

The aforementioned Newman and Bressett have a full-page ad for their now-delayed book. Coin-hunter — Catherine Bullowa — has a half-page ad.

It’s fun to see younger versions of old friends, but some 1962-vintage writing is wince-worthy by today’s standards. A picture of seven women on page 1459 is captioned “Seen at the ‘squaw party’ before the luncheon.”

But the ads are pure delight. You might hesitate before crossing the Rubicon Coin Co. (page 1594), but it might be preferable to buying from Loser’s Coin Store (page 1583).

If you bought from Loser’s though, you could always turn to Moldaner Coin Service to purchase a blue-on-white terry “Coin Collector’s Crying Towel” (page 1574).

Most of all, you come to understand why so many improperly cleaned coins exist today. 1962 was coin-scrubbing heaven; on offer were: Brilliantize, Jeweluster, Copper Coin Cleaner, Golden Glow Coin Cleaner, and Gem-Pruf, with its enticing tag line, “Makes Any Coin a Gem!”

So, whether you want to read important articles, or “Get Coins Clean with Nic-a-Lene,” collecting old coin journals is for you!