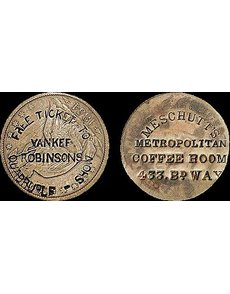 Two “newps” that Q. David Bowers recently added to his collection are a Yankee Robinson counterstamp on the obverse of an 1854-O Seated Liberty, With Arrows half dollar and the Meschutt’s counterstamp on the reverse of a heavily worn Spanish Colonial 2-real coin from the 1780s.

When I became a coin collector in 1952 and a numismatist perhaps a few months later, one of the first things to do was learn how to pronounce the word. Not “numissMATTist” but “numissMA(softly)tist.

Today, on the cusp of 2013 there are many terms. Here are some that come to mind, old and new:

? Artificial toning: Before 1979, a coin had to be BU (Brilliant Uncirculated) in order to be sold to 99 percent of buyers. Commemoratives, silver dollars, Proofs and others were brightened by dipping. Then arrived a change — toning can be desirable, can add value and can hide defects.

? Bid price: An advertised buying price, good unless the buyer already has too many, is out of cash, has changed his mind or doesn’t like the coin offered. It tells the true value of a coin.

? Blazer: Not a jacket or other outerwear, but a coin as bright as it might be after being freshly dipped. Synonym: Blast white.

? Crack out: Pronounced more or less like a city in Poland. What you do when a coin is in a slab (which see) but appears to be undergraded.

? Newp: Sounds like an amphibious creature, but means “new purchase.” At a convention dealers are often asked, “Show me your newps.” Don’t tell anyone this: sometimes tired old stock coins are included.

? Slab: Hermetically sealed plastic holder enclosing a coin and preventing its owner from studying it closely. Necessitates the purchase of a huge amount of storage space to house a collection.

? The 13th Commandment: If a coin is certified, but is overgraded or artificially toned, never remove it from its slab.