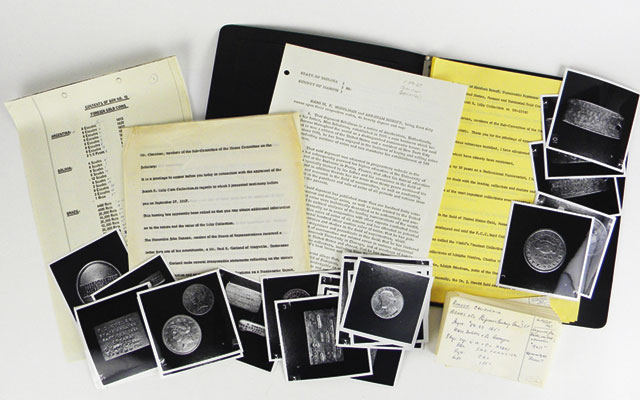 Dealer Abe Kosoff’s archive of research on the Josiah K. Lilly Collection, with pages of correspondence, inventories and photographs, is offered at auction in Baltimore Nov. 1. It has a pre-sale estimate of $20,000.

When Josiah K. Lilly donated his coin collection to the Smithsonian Institution, it required Congressional intervention to grant a tax write-off for the donor, causing a great controversy.

Dealer Abe Kosoff maintained an archive on the Lilly collection and the controversy surrounding its acquisition by the United States as part of the National Numismatic Collection, including inventories, photographs, pedigrees, prices paid, correspondence and other materials.

Now, one buyer can own all that material. The archive is among several notable highlights in Kolbe & Fanning Numismatic Booksellers’ Nov. 1 auction of numismatic literature in Baltimore, Md. The auction will be held in conjunction with the Whitman Coin & Collectibles Expo at the Baltimore Convention Center.

Researchers in 2003 announced that two gold bars in the Lilly Collection were modern forgeries.

The research was apparently archived by Kosoff to author a book about the subject, but the project never came to fruition, according to the auction catalog.

“[Since then], technology has helped to advance numismatic research by leaps and bounds, though absolute truth, as always, remains elusive,” according to the catalog. “The material present here may further aid in the separation of wheat from chaff, hero from villain.”

Other highlights from the auction, which includes the library of a “Journeyman Numismatist” and other properties, include 31 different “plated” Henry Chapman auction catalogs (meaning they contain photographic plates of some of the coins in the sale). Many of these sales are some of the earliest, notable collections, including Matthew Stickney, Charles Bushnell and John Story Jenks, among others.

The sale includes many other notable works, most especially on American colonial coins, featuring early plated sales and standard works as well as rarely offered photographic plates depicting specialized series. A number of items are unique, and many others are rarely encountered.

A PDF of the catalog is posted at the Kolbe & Fanning website, where prospective bidders may access the live, online catalog and register to bid.