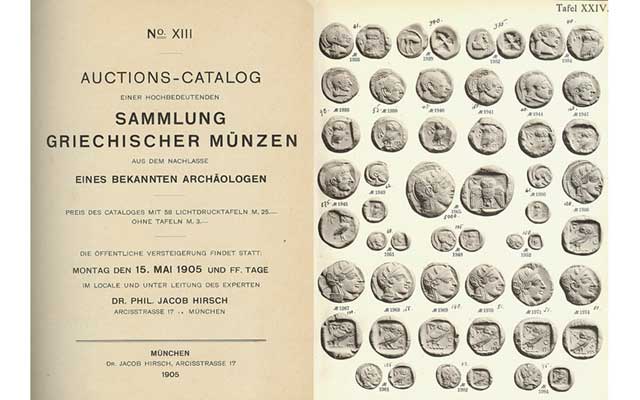 A highlight of the BCD Collection of duplicate numismatic literature is this 1915 catalog from a Hirsch auction of Greek coins.

The collector who is known publicly by the initials BCD amassed an enormous collection of Greek coins, which has been offered by several different auction firms during the past decade.

Numismatic literature from that famed collection continues to enter the market. Swiss firm Auctiones will offer 238 lots of books and other research from the BCD collection in its e-auction No. 39, which begins July 5, 2015.

According to Auctiones, “His initials are known to all those who love Greek coins. ... Less known is the fact that BCD has assembled a library on Greek numismatics that is by far the largest and most comprehensive of its kind in private hands.”

The auction features duplicates from the rare, highly specialized library.

Among the various titles offered, a variety of languages are found, including English, French and German, as well as Bulgarian, Catalan, Danish, Dutch, Finish, Greek, Hungarian, Italian, and Turkish.

A short offering of works exploring Byzantine and Medieval coinage follows, with offprints and auction catalogs rounding out the sale.

Prices for some works are as low as 5 Swiss francs (about $5.35 U.S.), though many rare and collectible works are included in the sale.

The literature features many notes that “reveal the profound knowledge and the great care with which the collector has examined his books. Almost every lot has a personal note of the owner to provide the potential bidder with a hint whether or not he really needs this book,” according to the auction firm. “These notes have been written with much humor."

BCD’s comments on a Sotheby catalog from Nov. 10, 1972, for example, note that the sale was “the auction that signaled the beginning of the price rally that finally placed ancient coins in the category where they should always belong: small in size but great in value.”

One of the highlights is an auction catalog for a May 15, 1905, Hirsch auction of a “great collection” of Greek coins, BCD noted, adding that the catalog was “often at my bedside and I never tired of admiring its rarities before going to sleep.”

To see all the lots and learn more about the auction, visit the Auctiones website.