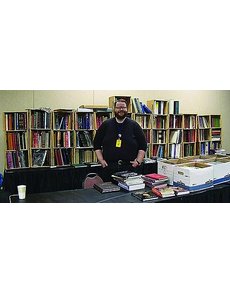 Mr. Burns was a regular on the coin convention circuit selling numismatic books, both rare volumes and standard references. He was a longtime member of the Pennsylvania Association of Numismatists.

Mr. Burns was predeceased by his parents. He had no immediate family survivors.

Pat McBride, treasurer of PAN and a longtime friend of Mr. Burns, said that he has been named executor of Mr. Burns’ estate.

Following the news of Mr. Burns’ death, McBride said he and Wayne Homren, editor of The E-Sylum, the online publication of the Numismatic Bibliomania Society, had discussed what needed to be done, as they considered themselves Mr. Burns’ oldest friends.

McBride said arrangements are being made for cremation and the sale of Mr. Burns’ book inventory to pay off any debts.

He said he plans to return to Florida soon and make arrangements to claim Mr. Burns’ vehicle and the inventory from his table that FUN officials have placed in storage.

Cindy Wibker, FUN’s convention coordinator, confirmed that FUN has Mr. Burns’ books in storage and personal items that were at his table.

“He would tell people at shows when they asked him what he had to sell, that he sold knowledge,” McBride said.

Donations to this fund can be made through the PAN website, www.pancoins.org, by clicking on the Donate to PAN button on the homesite, with a notation that the donation is for the John Burns Memorial Fund.

Homren offered his personal recollections of Mr. Burns in the Jan. 12 issue of The E-Sylum.

Homren wrote that he met the late book dealer while they were students at the University of Pittsburgh. Mr. Burns had responded to Homren’s invitation to fellow students to start a coin club.

“John quickly morphed from numismatic acquaintance to poker buddy and traveling companion. We went to many a coin show together, including a memorable trip through a blizzard that we both talked about for decades.

“Personally, we were polar opposites along every possible dimension, a textbook Odd Couple. But our mutual interest in numismatics kept us together, and he was a lifelong friend. My marriage, kids, and move to Virginia put all my old friendships on the back burner, but John was a constant. We didn’t talk a lot, but never lost touch. I’d always stop to see him when I visited a coin show, most recently the November Baltimore show.

“John was a talker, not a writer. He didn’t care much for email, and no one could ever convince him to write up a catalog or fixed price list of books for sale (let alone a website). He did business his way, the old fashioned way — in person with a hearty handshake. He loved his books, numismatics, and every last one of his numismatic friends, which are legion. I’ll miss him — we all will.”

“John loved mastering knowledge, both foundational and trivial, and that meant John loved books. He loved their weight and tactile sensations (even if he did spit curses at every loading dock he ever saw). He loved how they were gateways to things he’d never own and places he’d never visit. He loved their ability to serve as an equalizer, as a repository of that most final of weapons, information.

“Of course, John also loved a big steak, a nice whiskey, and a cold beer. He loved just about everything about a woman that a woman had to offer, and a wink or a hug could turn him into a massive pile of sweaty smiles and blushing. John loved his dad and adored his friends. He loved his friends’ friends and his friends’ families. He loved chatting, at his booth at a show or on the phone.

“It’s no wonder John did so many coin shows. The people he found there were his kind of folks: clever and funny, maybe a little awkward or odd, generally very smart and very sincere. He was forever inviting himself into dinner groups where he thought good convivial conversation could be had. John identified with a line I’d heard from a mutual friend of ours years ago, that most coin folks were misfits and loners. Of course, though John was an oddball and spent most of his time alone, he was really neither a misfit nor a loner. He loved being with his gang, and he fit in just perfectly in the world of numismatics.

“Now that he’s gone, there’s a pretty big void in the fabric of our odd little world. Professionally, there won’t be a blue collar bookseller at coin shows from Raleigh to Monroeville anymore. Personally, there are a whole lot of us who are going to miss our very frank, very funny, very honest, entirely unique, and always surprisingly well-informed friend,” Kraljevich wrote.

Numerous other tributes to Mr. Burns are posted on the Collectors Universe U.S. Coin forum under “Rest in Peace, John Burns,” http://forums.collectors.com/. ¦