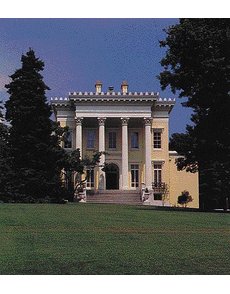 1979 photo shows Evergreen House in Baltimore, where the Garrett family lived. The author in 1979 cataloged the Garrett Collection of coins, which was one of the finest ever formed.

Recently, I spent an enjoyable several days in Baltimore attending the Whitman Coins & Collectibles Expo and checking in now and again on the auction sessions conducted by Stack’s Bowers Galleries.

As the home of the Eliasberg, Garrett, Newcomer, Cohen and other “name” collections, Baltimore has a deep tradition in numismatics. I illustrate Evergreen House, where T. Harrison Garrett and John Work Garrett formed one of the finest collections of coins ever. In 1979 I spent much time there in connection with cataloging the coins for auction by Bowers and Ruddy Galleries.

At the expo I gave a talk about the just-released The Encyclopedia of United States Silver Dollars 1794-1804. I mused that it is interesting that a die variety of copper cent of the 1790s of which there are, say, only a dozen known, will sell for tens of thousands of dollars in Extremely Fine grade, while a dollar of the same rarity will sell for just a fraction of that amount.

A question-and-answer session followed, in which the subject of “environmentally damaged” coins came up. As is well known, a nice-appearing coin of any denomination, if it is in a holder so marked, will sell for only a tiny fraction of the price of one that has no such adjectives.

I said that this was a huge problem needing to be fixed. As I have noted in this column earlier, “conservation,” standard in most other collectible fields, is a naughty word in numismatics. And yet, conservation occurs constantly.

I told of the copper pattern coins once owned by King Farouk of Egypt, who brightened all of his copper and silver coins by polishing them. The late Harry W. Bass Jr. had a number of these bright orange copper coins in his collection — acquired as such, for no others were available of these rarities. Today, most of the Bass coins have been recolored rich brown and are in certified holders with no mention of the process.

Some time ago a Coin World reader told me that he was having a field day buying at cheap prices certified Morgan dollars in holders marked “artificially toned,” taking them out of the holders, then sending them in for certification, after which many were returned without such designations. This is one way to cherrypick in the marketplace today. It is called “gaming the system.” Of course, some coins cannot be conserved, so some expertise is required.

The expo was active from beginning to end. Richard Eliasberg, consignor of his father’s (Louis E. Eliasberg Sr.) unique collection to one of my earlier firms, stopped by at dinner one evening — reminding me that good friends in numismatics are likely to remain friends forever.