NumisFiction: Telling the story behind the Ides of March coin 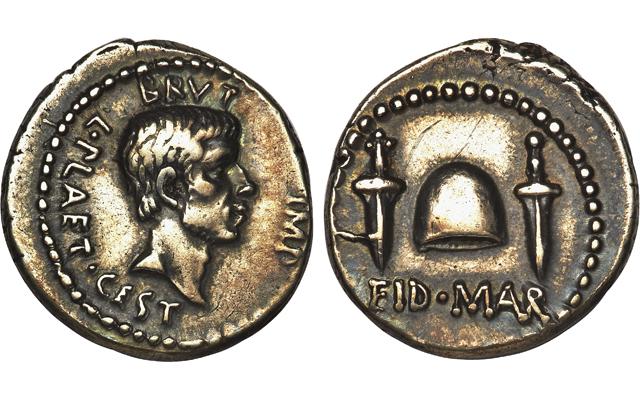 The author believes the Eid Mar denarius offers us major insight into Brutus’ ultimate designs. The quest to own the coin is the subject of Jamie Clifford’s novel Double Daggers.

I have a lifelong interest in collecting coins, in history and in writing, and I’ve combined these passions to write works of fiction that have numismatic themes. I like to call my books NumisFiction, and they range from good old-fashioned adventure stories to historical fiction to supernatural thrillers.

I love the stories behind historical coins. The assassination of Caesar on the Ides of March 44 B.C. forever changed the direction of western civilization, and this infamous day with all of its intrigue has long since fascinated historians, scholars and writers. The chief conspirator in the plot was Marcus Brutus and he later minted the Eid Mar denarius, which is one of the most famous coins from the ancient world.

The expression “Beware the Ides of March” was made famous by Shakespeare in The Tragedy of Julius Caesar. In the play, Shakespeare depicts Caesar as a ruthless tyrant while Brutus is portrayed as the tragic hero trying to win freedom for Rome.

History has tended to be favorable toward Brutus and even Gulliver in Jonathan Swift’s Gulliver’s Travels was awestruck by Brutus. He said, “I was struck with a profound veneration at the sight of Brutus, I was and could easily discover the most consummate virtue, the greatest intrepidity and firmness of mind, the truest love of his country, and general benevolence for mankind, in every lineament of his countenance. ...”

But the poet Dante had a much different take on Brutus. During Caesar’s long rise to power Brutus fought against him numerous times but after every betrayal Caesar would inexplicably pardon and then even promote Brutus. So in Dante’s poem Inferno, Brutus is confined to the lowest level of hell — by killing Caesar, a man who had given him so much, Brutus is doomed to eternal damnation.

So who is right? Was Brutus a hero, a liberator, a champion of freedom trying to save the Republic from a tyrant, or was he a cold-blooded murderer who was jealous of Caesar and wanted to take control of Rome for himself?

In my opinion, the Eid Mar denarius offers us major insight into Brutus’ ultimate design. For hundreds of years during the Roman Republic, tens of millions of coins were minted but a living person was never depicted on a coin because no one individual was seen as greater than the Republic. This sacred belief held true until Caesar became the first living Roman to have a coin minted with his portrait on it and he even proclaimed himself dictator for life.

But what does Brutus do? After killing Caesar he mints a coin with his own portrait on the obverse. So by placing his portrait on a coin he is also elevating himself above the Republic, which was one of his reasons for murdering Caesar in the first place.

Many numismatists suggest that the symbols placed on the reverse of the coin give it a double meaning. By placing the liberty cap between the daggers, it is thought that Brutus is commemorating both the death of Caesar and the death of the Republic.

Although the true motivations of Brutus may never be known, I believe Dante’s depiction of Brutus is probably the more accurate one. At the least, Brutus betrayed Caesar who had repeatedly forgiven him and who was largely responsible for his success. And at the very worst, Brutus hid behind the saving of the Republic and murdered Caesar because he was jealous of Caesar’s rising power.

If you are interested in NumisFiction and characters with sinister motivations, check out my historical fiction novel titled Double Daggers. The story is about a curse that begins with the assassination of Caesar and follows four men’s unrelenting obsession to acquire the Eid Mar denarius.

The four men are: Brutus, a knight traveling on the Crusades, an SS lieutenant under Hitler, and a modern day Wall Street trader. These flawed men have something more in common than just their obsession to possess the infamous coin — and that is the true mystery and curse of the Double Daggers.

Double Daggers was selected as an American Numismatic Association Book of the Year and placed as an Award Winning Finalist in Historical Fiction for the National Indie Excellence Book Awards.