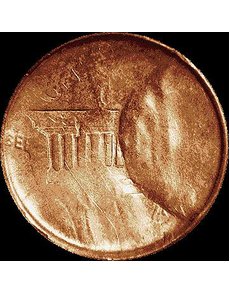 The obverse face of this copper-alloy Lincoln cent displays a counterbrockage/clashed cap strike. Counterbrockage elements include the BER of LIBERTY, parts of Lincoln’s bust and the first two digits of the date. 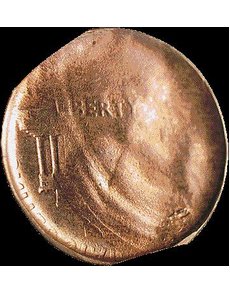 The working face of the die cap that struck this coin belatedly received a partial brockage when a coin was fed partway into the striking chamber. The result is a cent with an early-stage brockage on the left side and a partial counterbrockage on the right side. 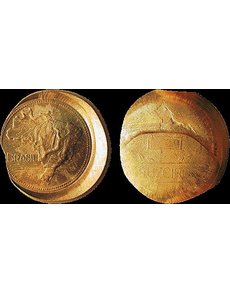 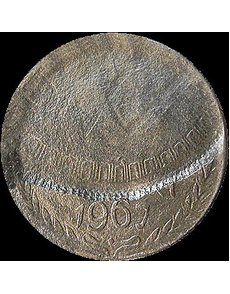 Most error collectors are familiar with the appearance and origins of brockage and counterbrockage errors.

In its simplest form, a brockage is an incuse, mirror-image version of the design, produced when a coin is struck into a planchet.

The considerably rarer counterbrockage is a raised, normally oriented version of the design, produced when a coin bearing a brockage is driven into a planchet.

Both brockages and counterbrockages are highly variable in their completeness, clarity, location, orientation, coverage, and degree of distortion and expansion.

It’s rare when a brockage and a counterbrockage appear on the same face of the same coin. In the November/December 2009 issue of Errorscope, I identified at least eight pathways by which such a combination can arise from a single strike. Some types are known only from foreign issues, while others have yet to be documented. Four types are depicted here.

The most frequently encountered type of brockage-counterbrockage error is the counterbrockage/clashed cap strike (see the Aug. 30, 2009, Collectors’s Clearinghouse). An example belonging to Robert (“B.J.”) Neff is shown here.

The sequence of steps necessary to produce this cent began when a planchet was fed on top of a newly-struck cent that remained within the striking chamber. The two stacked discs were struck together, leaving the top coin with a brockage of the obverse design on its reverse face. The top coin stuck to the obverse (hammer) die while the bottom coin was ejected.

The top coin (now a die cap), proceeded to strike a handful of planchets, leaving each with a counterbrockage of the obverse design on the obverse face. At some point a planchet failed to be fed into the striking chamber and the working (reverse) face of the die cap clashed directly with the reverse (anvil) die. This left the working face of the die cap with an incomplete raised reverse design. The clash also erased part of the brockage on the cap’s working face, leaving the latter with a mixture of raised, die-struck design elements and incuse elements. Every coin struck by this cap after this point was left with an incomplete brockage overlying an incomplete counterbrockage. Because the brockage on this particular example shows no expansion, it probably represents the first planchet struck after the clash.

The raised, featureless area on the right side of the coin represents an additional complication — an indent in the working face of the die cap. Evidently the die cap struck a planchet that was fed partway into the striking chamber. This probably occurred either before or simultaneous with the clash.

Our next brockage-counterbrockage error reflects a sequence of events that is almost the reverse of the one just described. Here a conventional early-stage obverse die cap that was producing brockages struck a cent that intruded partway into the striking chamber. The intrusive cent left a partial brockage of the obverse design on the working face of the die cap. The next planchet, represented by the illustrated coin, was left with an early-stage brockage of the reverse design on the left side of the obverse face and a counterbrockage of LIBERTY and the back of Lincoln’s bust on the right side.

The next example represents a circumstance I have not yet encountered in a U.S. coin. The planchet represented by this Brazil 2-cruzeiro coin (1942 to 1956) was fed in on top of a previously-struck 2-cruzeiro piece with a 60 percent partial brockage of the reverse design on the obverse face. The reverse face of the illustrated coin consequently shows a 60 percent counterbrockage consisting of the bottom of numeral 2 and the denomination CRUZEIROS. The brockage consists of the southern end of the country of Brazil. I have seen similar errors from Costa Rica, Argentina and Canada.

The 1967 India 50-paisa coin shown here owes its appearance to another unusual circumstance yet to be documented in a U.S. coin. The southern third of the reverse face (struck by the hammer die) is occupied by a first-strike counterbrockage. The upper two-thirds is occupied by a partial brockage of the obverse design produced when a previously struck 50-paisa coin was fed into the striking chamber between the hammer die cap and the planchet represented by this coin.