Nudity on coins once a common design theme 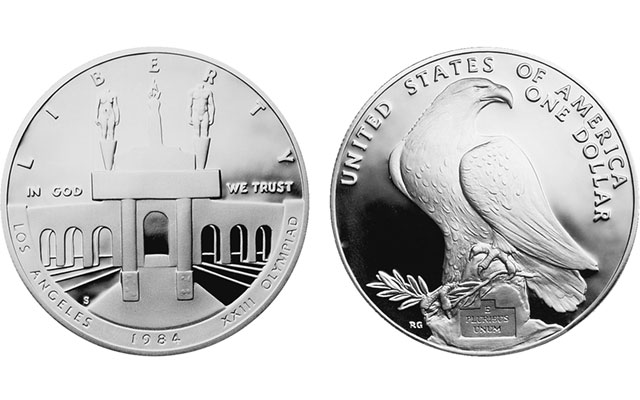 The stylized male and female torsos on the obverse of this 1984 Los Angeles Olympic silver $1 coin are not as explicit looking as first proposed.

You can hardly put naughty bits on coins and paper money anymore. In the 19th and early 20th centuries, nudes full and partial appeared with regularity on numismatic items.

Now, not so much. Except for art medals, you’ll find nary a naked man or woman in modern numismatics.

The coin shows a “naked” female torso to the left and a “naked” male torso to the right above the entrance to the Olympic stadium. You can study those torsos with a 100-power magnifying glass all day long and see not much of anything.

The female torso’s nether regions looks mostly like those of a baby doll — just space between the legs. The male torso has a bit of a bulge in the pubic area but it has no definition. The torsos are about as anatomically correct as a Lego man.

How the pair lost their private parts is an interesting tale that Q. David Bowers exposed in his 1991 book, Commemorative Coins of the United States: A Complete Encyclopedia.

The pair, Bowers reports, started out as reasonably complete, but lost definition as the design process proceeded.

Artist Bob Graham, an outside artist picked by the Olympic committee, provided a plaster model of the coin, which Mint Director Donna Pope determined showed nudes that “were too explicit for us.” She asked Graham to tone them down.

“He did something,” Pope told Bowers, “and the 20-year-old (?) torso of the woman first shown, suddenly looked like a 60-year-old’s top torso. The male torso got more explicit instead of less explicit. I was very nervous about having nudes explicit.”

She said she secretly called Bill Smith, Philadelphia Mint head of production, and “told him in rather specific terms to lower the relief on a certain portion of the male torso. The coin turned out nowhere near as explicit as the plaster. The coin we all dreaded didn’t look terrible.”

The coin was one of three Olympic commemoratives — 1983 and 1984 silver dollars and a 1984 gold $10 piece. The 1983 dollar shows a stylized discus thrower who might be nude, but we’ll never know because his right leg is strategically placed to evade the issue.

The runners on the gold piece are wearing shorts and shirts.