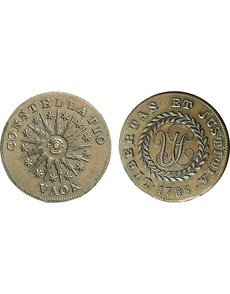 Struck in England in 1785, Nova Constellatio coppers were common in American circulation. A variety collection is a manageable challenge.

There aren’t too many short variety series among the Confederation coppers. Connecticut coppers lead the way with more than 300 varieties, and New Jersey coppers total up at more than half that number. Collectors have identified almost 60 varieties of Fugio coppers, almost 50 varieties of Massachusetts coppers and almost 40 varieties of Vermont pieces.

While nearly complete sets of each of the last three have been assembled, and massive cabinets of Connecticut and New Jersey coppers have also been gathered up, each of these tasks takes years and depends upon a collector being willing to buy some ugly coins — some rarities in these series exist only in abysmal grade.

One of the more digestible series of this era, where even the scarce varieties are acquirable in decent grade, is the Nova Constellatio coppers. Copied from the earliest American attempts at a pattern coinage, the English-made Nova Constellatio coppers are found dated 1783, like their pattern predecessors, and 1785, the year that all of the coppers were probably struck.

Robert Morris and Gouverneur Morris (no relation) were the minds behind the creation of the 1783 patterns, in an attempt to convince the Continental Congress to adopt Robert Morris’ oddball coinage scheme. Unsuccessful at that, they teamed with Philadelphia merchant William Constable to have coppers produced in England to circulate in America — a profitable proposition, given the difference in value between the materials and labor and the price of a copper in commerce.

The coppers first turned up in the spring of 1786, first mentioned in the London press, then in New York and New England before summer. The first illustration of a Nova Constellatio is found in a London magazine from that fall.

Many thousands were apparently struck. Joseph Felt, in his 1839 work An Historical Account of Massachusetts Currency, mentions that they were common in Massachusetts before the opening of the mint there in 1787. Even today, pretty much every coin show bourse will have a Nova Constellatio lurking here or there.

Just 10 varieties make up the Nova Constellatio variety collection, one of which is a 1786 rarity that is deemed by most a circulating counterfeit. Omitting that variety, the other nine include no great rarities, though three of them are scarce in decent grade and rare in genuinely nice shape — just enough of a challenge to make them interesting. Most of the varieties are easily found in grades up to and including Extremely Fine. Their simple, elegant designs and authentically American story make them a prime series for both beginners and specialists.