Notches, fissures and holes left by many minting mishaps 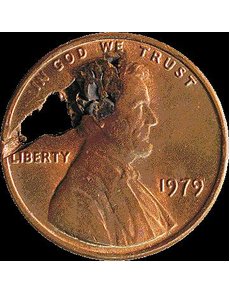 Half of a slag inclusion fell out of this 1979 Lincoln cent, leaving a sizable hole in the coin. 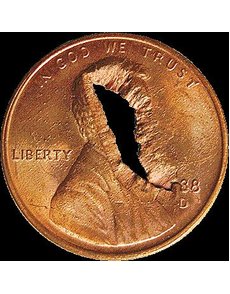 The large “blowhole” seen in this 1988-D Lincoln cent was opened up by tensile forces during rolling out of the coin metal strip. 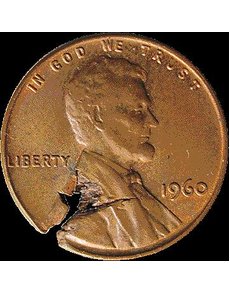 This ragged fissure on a 1960 Lincoln cent is the result of a blanking die slicing through a natural fissure in the coin metal strip. 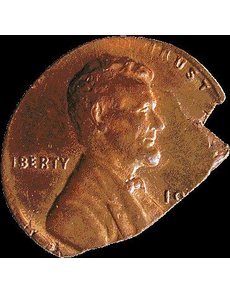 A notch occupies one end of the ragged clip in this off-center Wheat cent, struck on a planchet possibly punched from the end of the strip. 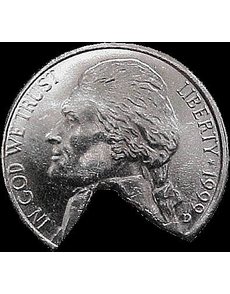 An assay clip is responsible for the “missing pizza slice” in this 1999-D Jefferson 5-cent coin. 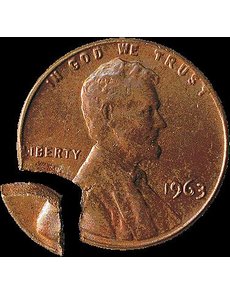 A triangular piece broke off this 1963 Lincoln cent after the strike. 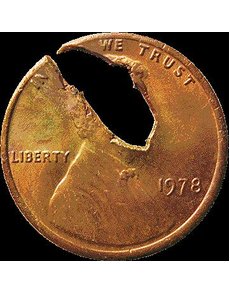 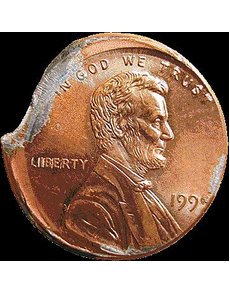 On this off-center 1999 cent, an area of pre-strike planchet damage terminates in a small hook.

Fans of planchet errors take a natural delight in defects that interrupt the circular outline or perforate the body of a coin.

Many different steps in the minting process can generate a notch, fissure, or hole.

The process can start when the alloy is still molten. If not completely skimmed off, bits of slag can be incorporated into the ingot from which coin metal is rolled. If the slag falls out before or after the planchet is struck, it leaves a hole in the coin. The illustrated 1979 Lincoln cent has a large slag inclusion, half of which fell out after the coin was struck.

As the coin metal is rolled out, tensile stresses can tear open the strip, leaving holes and fissures. This can occur if the strip is brittle due to the presence of contaminants or because it wasn’t heated to a high enough temperature prior to rolling. One outcome is a so-called blowhole, an example of which is shown here on a 1988-D Lincoln cent. The beveled edges are characteristic of such errors.

Beveled edges indicative of tensile rupture are also seen in a 1960 Lincoln cent with a ragged fissure. Here the blanking die sliced through a fissure in the coin strip.

Notches can also appear as part of a ragged clip. Ragged clips can be derived from the unfinished ends or the interior of the coin metal strip. The rough edge tends to have a lumpy appearance. The Wheat cent shown here was struck off-center on a ragged clip planchet. A notch caps the upper end of the ragged clip.

Once rolling is completed, a sample may be removed from the ends or sides of the strip to test its physical properties. If a blanking die overlaps the resulting angular notch, the blank is left with an assay clip. Assay clips are very rare and are often difficult to distinguish from other angular deficits. The illustrated 1999-D Jefferson 5-cent coin features a convincing example. Close inspection revealed mechanical damage consistent with the use of metal snips.

A brittle planchet can break apart before or after the strike, producing respectively a broken planchet or a broken coin. Angular breaks are rare, but one is seen here in the southwest quadrant of a 1963 cent.

Some notches and holes defy categorization. The illustrated 1978 Lincoln cent shows a large oval deficit that is almost completely walled off. It lacks the beveled edge of a blowhole and the flinty irregularities of a hole once filled by slag. It doesn’t have the uniform graininess of a broken coin, either. The microscopic texture varies from rough and lumpy (like a ragged clip) to smooth. Over most of its course the edge is distinctly convex in vertical cross section.

Pre-strike planchet damage can leave deficits of every imaginable shape, including notches. The illustrated 1999 Lincoln cent merely shows a “hook” at the lower end of the damaged area. Judging from identical damage in the same spot in several other 1999 cents, I suspect it was inflicted by the feeder mechanism.