Not every 'foldover' is an error; some are simply damaged 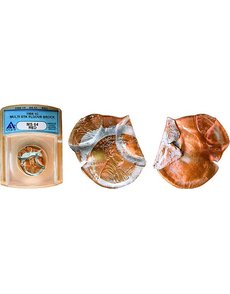 One of the off-center strikes on this triple-struck 1999 Lincoln cent was bent over after the coin left the striking chamber. The bend was erroneously identified as a “foldover” (foldover strike) by ANACS. 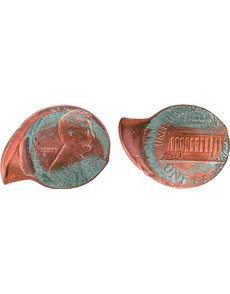 This Lincoln cent, struck sometime in the 1980s, displays a genuine foldover strike. 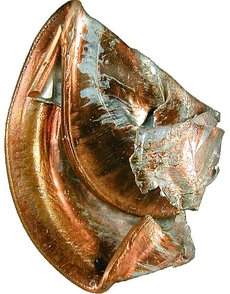 Another false “foldover error” is housed in an ANACS slab. It is simply a badly damaged error coin.

I am a regular visitor to several online discussion groups dealing with minting errors and die varieties. One of the most active is Lincoln Cent Resource (www.lincolncentresource.net/forums/index.php), which has upward of 75 posts a day.

A regular contributor to that site is Joe Koelling, an enthusiastic collector of both errors and varieties and a dedicated roll-hunter. Koelling has discovered a prodigious number of new die varieties. In just the past year he has found nine new Lincoln, Doubled Die cents that manifest as one or more “extra columns” that lurk in the bays between the normal columns of the Lincoln Memorial on the 1959 to 2008 cents. In addition, he’s identified two new die pairs among 1988 Lincoln cents with a “transitional” 1989 reverse and five new die pairs among 1988-D cents with “transitional” 1989 reverse. Finally, he is credited with the discovery of a major doubled die reverse on a 1991-D Lincoln cent (cataloged variously as FS-#801, CDDR-001/WDDR-001).

Koelling likes to educate and entertain his fellow group members by occasionally posting photos of complex minting errors. One of those errors is shown here. This 1999 Lincoln cent was labeled by ANACS as a “MULTI STK FLDOVR BROCK” (translation: multi-struck, foldover, brockage). It was given a grade of Mint State 64. Koelling sent the error to me for a closer look after I expressed reservations about the “foldover” component of the diagnosis as well as the grade.

I assume that by using the term “foldover,” ANACS meant that this was a foldover strike (the word is used in no other context). I asked ANACS customer service for clarification of their use of the term but received no response.

When I first saw a photo of Koelling’s coin, I knew that the “foldover” was just post-strike damage. Personal inspection simply confirmed my assessment. The off-center strike on the right was bent over during ejection or after the coin had left the striking chamber.

If this was a genuine “foldover” error, it could only be an asymmetrical (paraxial) foldover strike, like the one shown in the July 18 “Collectors’ Clearinghouse” column. But if fails on four criteria:

(1) There should be an edge strike at the pole opposite the foldover flap. None exists.

(2) The flap should be bonded to the main part of the coin or at least tightly pressed against it. Instead, there is a considerable gap between the flap and the rest of the coin.

(3) The design should cross the edge of the flap in uninterrupted fashion. Instead, the design stops abruptly at the flap’s edge.

A true foldover strike is shown here for comparison.

Since the “foldover” on the 1999 Lincoln cent is simply post-strike damage, the assigned grade of MS-64 is unrealistic.

I have seen several other damaged coins that have been encapsulated as “foldovers” by ANACS. Shown here is another example. It started out as a terrific error — a multiply struck cent that emerged from the middle of a pile-up of other cents. The obverse face has a brockage of the reverse design and the reverse face a grossly expanded raised reverse design. It would have been roughly disc-shaped upon emerging from the striking chamber. Unfortunately, it was subsequently crumpled in Mint machinery or equipment in a coin-wrapping facility. Its grade of MS-64 can be disregarded.