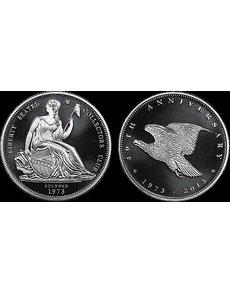 Medals marked the 40th anniversary of the Liberty Seated Collectors Club in 2013. The example illustrated is a silver Proof version. The club seeks officer and Hall of Fame nominees from among its membership.

Nominations are also being accepted for the 2013 LSCC Hall of Fame.

John McCloskey will retire as LSCC president and editor of the Gobrecht Journal effective Aug. 31 after more than 38 years in both positions.

Stephen Crain accepted appointment as LSCC club historian. Crain will take responsibility for McCloskey’s papers related to publishing the Gobrecht Journal (the Archives) and to historical documents pertaining to the earlier days of the LSCC.

Nominations are being accepted from the LSCC membership through April 1 for president, vice president, editor (for the printed Gobrecht Journal and emailed E-Gobrecht), and secretary/treasurer. All four positions together will comprise the LSCC Board of Governors.

At the Jan. 10 LSCC meeting in Orlando, nominations were made for Gerry Fortin as president, Len Augsburger as vice president, Bugert as editor, and Craig Eberhart as secretary/treasurer, but additional nominations for each of the four elected positions are being sought.

Nominated individuals must be club members and should possess numismatic or professional experience consistent with the officer role for which the member is being nominated.

Nominations are to be submitted by the April 1 deadline, in writing, by postal mail to Leonard Augsburger, LSCC Secretary/Treasurer, P.O. Box 6114, Vernon Hills, IL 60061, or by email to leonard_augsburger@hotmail.com.

Nomination submissions should include the intended position, the nominee’s numismatic role or accomplishments and professional skills, and a digital image of the nominee.

All club member nominations and supporting information will be published in the April E-Gobrecht.

Nominations for the LSCC Hall of Fame are to be directed to Bugert, with an April 15 submission deadline.

Basic qualifications for club member nominees for the honor are significant advances or contributions in at least one of the following four areas:

This year’s inductee will be announced at the LSCC Annual meeting in August at the American Numismatic Association’s World’s Fair of Money in Rosemont, Ill. ¦