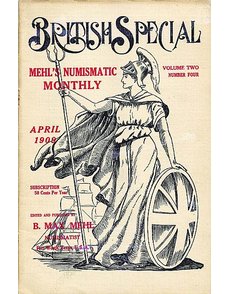 When a dealer publishes a magazine combining articles with coin listings, it is known as a “house organ,” and B. Max Mehl played such instruments with gusto.

In January 1908, Mehl’s Numismatic Monthly debuted, with an annual subscription rate of 50 cents. This first issue had an articles-to-ads ratio of 15 to 1; by September, Max’s Monthly rivaled The Numismatist, published by the American Numismatic Association, from length of issue, to depth of articles, to quality of graphics.

In Mehl’s September issue, 16 pages were devoted to articles previewing the impending ANA convention, illustrated by 13 portraits of the association’s leaders.

As the illustration shows, the Monthly was not limited to U.S. coinage; foreign and ancient pieces were always on offer, and discussed in articles written by leading collectors.

The December 1911 issue contained an “Announcement Extraordinary!” — Mehl was suspending publication of his house organ and moving to New York City, where he would enter partnership with Wayte Raymond.

Mehl’s partnership with Raymond and his sojourn in New York City were both brief. Before 1912 was out, Max returned to Fort Worth, Texas, and in January 1914, he revived the Monthly. Its quality deteriorated; it had fewer meaty articles and more fillers.

Even this reduced fare eventually proved too much, for in December 1919, at the close of the Monthly’s 10th volume, Mehl admitted he could occupy his time more profitably, and ceased publication.

In less than two years, however, he rolled out his second house organ, Mehl’s Coin Circular. A more modest enterprise, the Circular was smaller and shorter than the Monthly, with fewer quality articles and more ads.

Projected as a monthly, only 15 issues were emitted from 1921 to 1933. Mehl’s own set of Circulars survives, and sheds light on his business practices. In Circular No. 14, he offered “two or three” Lady Godiva Coventry halfpennies for 75 cents each. The tally marks in his copy show that he actually sold 37!

The article-to-ad ratio of Mehl’s Numismatic Monthly had inverted in the Mehl’s Coin Chronicle, making it difficult to distinguish from a mere price list. In September 1939, the second — and final — issue of the Coin Chronicle appeared, closing with a plea for articles rather ominously titled “This is Not a Threat.”

Today, all of Mehl’s three house organs are scarce, but a complete set of the Circular and the Coin Chronicle sell inexpensively — $75 for the Circular and $25 for the Chronicle, respectively — when offered by dealers or at auction. Complete runs of the Monthly, as befitting their quality and rarity, routinely sell for more than $1,000 at auction.