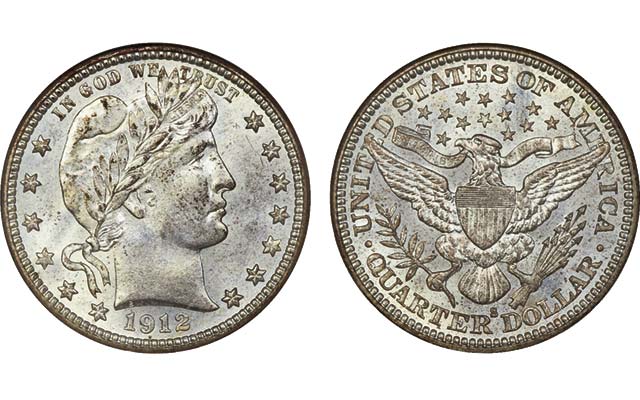 This 1912-S Barber quarter dollar, graded MS-68 by Numismatic Guaranty Corp., brought $11,162.50 at the May 12 Gardner auction. It too was once part of the Eliasberg Collection.

Visually it served as a nice contrast to the more vibrant toned Barber quarters in Gardner’s collection, as it has mostly even silver-gray color with some darker accents over the high points.

The Gardner catalogs are noteworthy in that they include comments from the consignor. On this coin he stated: “For a long time alone atop the condition charts, it has now been equaled by one other at PCGS. There are only five other coins in MS67 supporting these two. The Eliasberg catalog mentions roughness in the area of the second S in STATES, and under high magnification it is easily seen partially filling the upper loop of the S. Something caused this, and if I let my imagination run wild it looks somewhat like a misaligned S, even though I do not think this is theoretically possible. Wonderfully fresh and original.”