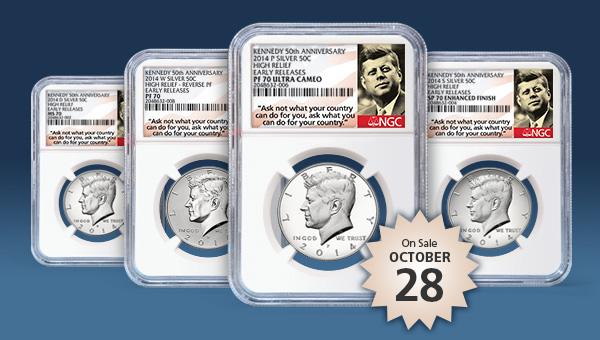 The 2014 High Relief Silver Kennedy Half Dollar 50th Anniversary four-coin set is the most hotly anticipated modern coin release since 2011's sell-out 25th Anniversary Silver Eagle Set. The US Mint has announced that the Silver Kennedy Half Dollar 50th Anniversary set will go on sale October 28 with 150,000 sets ready to ship. NGC will offer its popular Early Releases and First Releases designations only for those coins received by NGC within 30 days of their release.

Collectors can enhance the presentation of these exciting new Kennedy releases with a special large-sized label created by NGC. The label features an iconic portrait of John F. Kennedy, the 35th President of the United States, along with his famous quote: “Ask not what your country can do for you, ask what you can do for your country.”